The 40 Days for Life in Sherbrooke 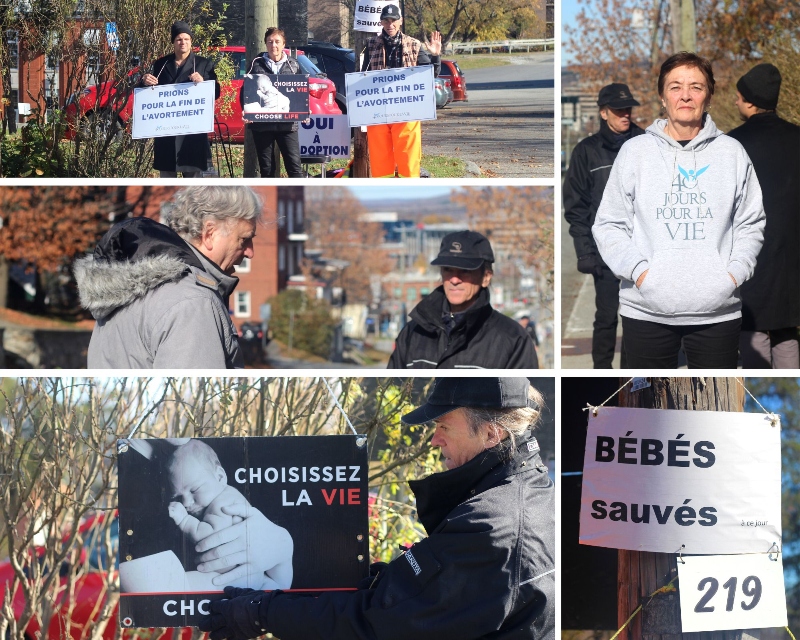 This fall, hundreds of communities across North America and several Canadian cities simultaneously organized a 40 Days for Life campaign from September 28 to November 6, 2022.

The 40 Days for Life is a focused pro-life effort that consists of:

I was present in Sherbrooke on the 31st day to report on this event. Brian Jenkins, who is the leader of the team, was on place to give me a warm welcome. This man spends 12 hours a day outside, from 7:00 a.m. to 7:00 p.m. during the 40 days, as an advocate for life. He takes a break at noon, during which Mr. Gerard replaces him, for the entire length of the 40-day vigil. The vigil participants vary from day to day, but Brian and Gerard are present daily.

By law, Brian and the other participants must not be within 50 meters of a facility where abortions take place, in this case the CLSC Belvédère (Local Community Services Center). So far, there have been no counter-demonstrators, whereas last year a pro-choice group of 100 people gathered against 3-4 people who were doing the vigil. Gerard shares with me that the Sherbrooke police supported the vigil participants last year, and since then they have been supported by the Sherbrooke authorities. Brian has a working relationship with the police of Sherbrooke and can count on them for their help to maintain their safety. 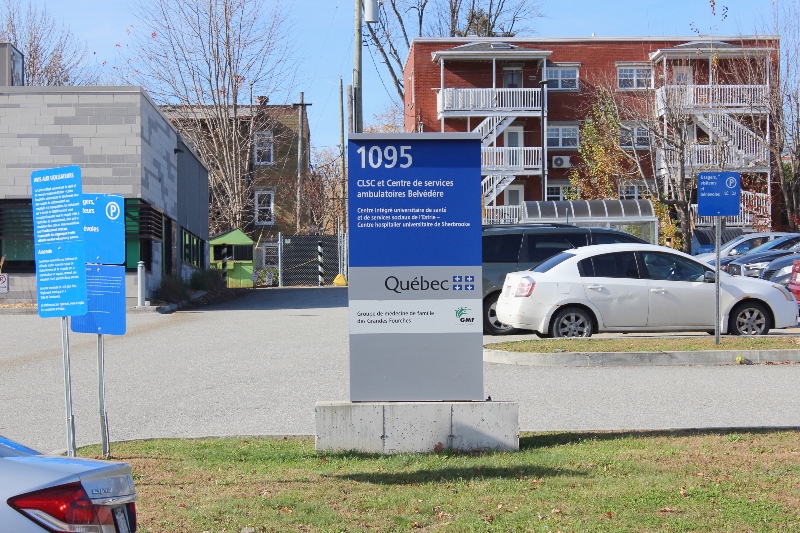 The atmosphere of the vigil is characterized by prayer and the honking of passing cars. Some honk in support, while others, in frustration, accompany their horn with a middle finger. Brian is wearing a fluorescent outfit that was given to him as a gift and allows him not to go unnoticed by the motorists. Like a sandwich-man, he carries two large signs, one on the front, the other on the back, that read, "Pray for an end to abortion." Brian is the definition of a "hero for life," according to Arpad Nagy, Director of Political Operations at QLC. 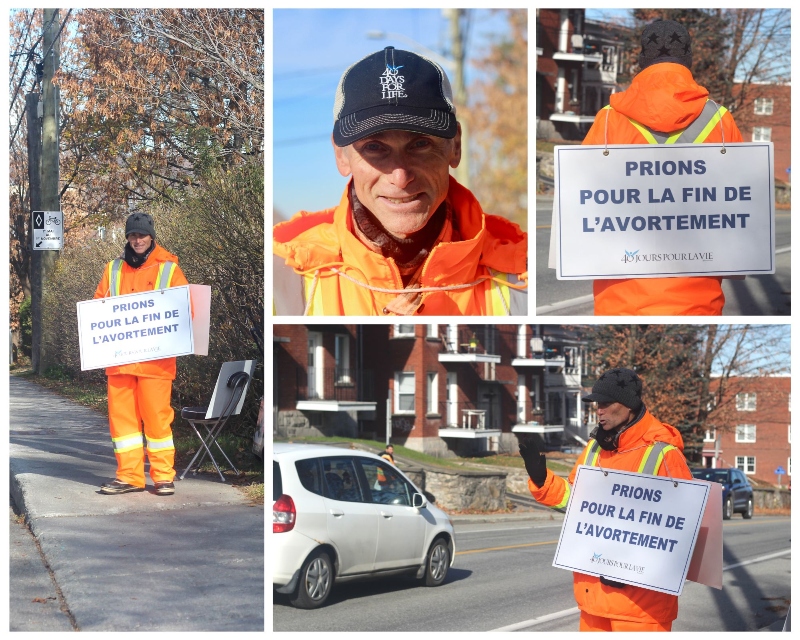 Brian Jenkins in action during the 40 Days for Life - Photo: Joanne of Arc

Brian shares with me that he is happily surprised by the participants who travel from far and wide for the 40 Days for Life. This year, at least half a dozen people traveled from Montreal or Quebec City, and one person from Quebec City to Sherbrooke via Montreal, to attend the event.

During my visit to Sherbrooke, I also met Michelyne who has been participating in the 40 Days vigil since last year. Her personal motivation to get involved in the movement is based on her faith. Here is what she shared with me: "I have faith and for me God is the creator. He decides when you come into the world, and he decides when you die... And if I can put what I believe into action, I do it." 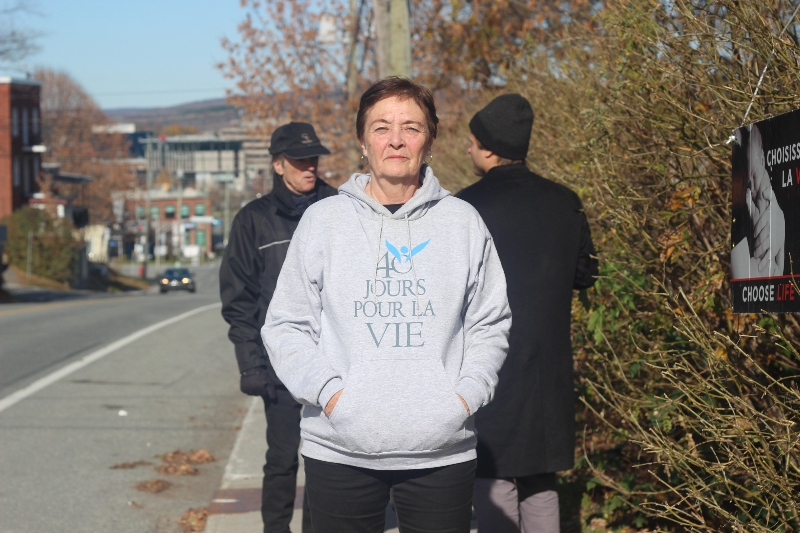 Mycheline, a pro-life activist at the 40 Days for Life - Photo: Joanne of Arc

Unfortunately, she says she is the only one who participates in this movement among her family and friends. She has even been told by others that she is wrong. However, Michelyne remains firm in her convictions, she is a true militant for life. She also shared with me her testimony which touched me in particular. When she was pregnant with her third child and living in France in 1986, during her visit to the doctor, she was asked the question "if she wanted to keep the child". She was stunned, frozen and did not know how to react. That was the first question that came out of the doctor's mouth. The morning of the abortion, she found herself alone, started to think and realized that she did not want to have an abortion. She decided to choose life. The pregnancy was not easy, but she asked God to take care of her child. Today, the child she decided to keep is a mother of two.

Another participant, Celine, commented on this initiative as follows: "I think it's a beautiful initiative, and it's worth persevering (...) we pray while doing it, and we shouldn't worry, the results are certainly there, in the invisible. We don't see everything. You have to know that every thing that is done with a good heart is heard, and it opens something in people's hearts (...) Even if there are negative reactions, there is a grace for the mere fact of being there and praying (...) It's a struggle between the forces of evil and the forces of good."

Sylvain participates in the 40 Days for Life with homemade signs by his wife Martha every weekend, in addition to working full time. He decides to devote a full day of his weekend to this cause, to show that life is important and that it is sacred.

He is there foremost as a Christian, secondly as a father because he wants to leave a proper legacy for his children in the future. Right now, "we live in a world that promotes death" as he says. That's why he's testifying alongside Brian.

He asks people: "Do you realize what is happening? Do you agree with what's going on with abortion and euthanasia? This is far from over. We only have to look 2-5 years into the future, and it will get worse. By our presence, we want people to take the time to listen to us and say, be careful, come back to Christian values because that's what guarantees a future and a present that is viable."

He adds, "Jesus-Christ is a God of Life, light and truth. If only the people who are hard on us knew how much we love them! We are not here just to resist, it's a gesture of love to be here (...) It is not always easy to be here, but it is especially in these difficult moments that we must stay and spread the love of the Lord in the world".

He concludes: "It's very important to be there at least once a week. It's a training to be there. We get shuffled around, but it trains us. It's an extraordinary school. We learn to see where we are in our faith in relation to others. When we talk to people and it's difficult, it makes us grow (...)"

The 40 Days for Life in Sherbrooke ends on Sunday, November 6, and a celebration will be held to conclude the vigil. There will be a meal at the Précieux-Sang church where everyone is welcome to discuss the impact the vigil has had on them.

In conclusion, it is important to remember that since 2007, thousands of individual campaigns have taken place in hundreds of cities in 63 countries around the world, bringing together more than one million people in this historic demonstration of unity, prayer and fasting for an end to abortion.

The 40 Days for Life vigil succeeded in closing more than 100 abortion facilities and saved thousands of babies across the United States and Canada. In addition to the saved babies, more than 200 abortion workers have quit their jobs and walked away from the abortion industry, and thousands of women have been spared the pain and trauma that comes with the decision to abort their own child. If there’s ever a time to be involved in this cause, it’s the present moment.

« Thank you for your ministry. My prayer is that it grows in the name of Jesus. It's beautiful to see people stand up for Life ! » --Émilie
Give to Quebec Life Coalition
40 Days for Life abortion pro-life Quebec Canada Sherbrooke