Blessed summertime greetings to you and your loved ones.

As hinted in our previous newsletter, the Quebec government has indeed gone ahead with a bill permitting the practice of euthanasia in our province.

Fortunately, Bill 52, entitled “An Act permitting end-of-life care,” has only been tabled; it isn't law.

Yet, there is little preventing it from becoming law when the National Assembly resumes in September for all four sitting parties agree with the legislation.

Pray. We can do little without being in union with and supported by our Divine Maker. Prayer, either individually or with others, brings us closer to God to learn his will. One person suggested forming prayer groups within our own faith communities to counter this threat.

Become knowledgeable. The 20-page bill is available simply by visiting the Quebec National Assembly web site ; if you are having difficulty procuring it, call me (438- 930-8643) and I will walk you through the exercise.

Next to perusing the proposed law itself, read commentaries about it. For instance, Alex Schadenberg, the Executive Director of Euthanasia Prevention Coalition, has commented on the bill’s lack of clarity. Concerning section 3 (3) which states that “End-of-life care means palliative care provided to persons at the end of their lives, including terminal palliative sedation, and medical aid in dying...,” he writes:

Here is a sampling of other voices opposing this dangerous law.

Act. Consider calling or, even better, visiting your MNA. Our elected officials need to know that this is a dangerous law. We need to say NO to bill 52 and euthanasia, and YES to a natural death with TRUE palliative care, NOT to terminal palliative sedation.

Also, consider visiting your elected official. Summer is here and many will be returning to their home riding. Take advantage of this to visit them either in their office or at public gatherings such as a corn roast. Their office locations are readily available again by calling Quebec City.

Remember. You are not alone. Many physicians are speaking up about the pending dangers of this law. This past May 18, 2013, a physician group – “Total Refusal of Euthanasia … Caring, not Killing,” was a principal organizer that brought 1700 persons to Quebec City to voice their disapproval of the government’s plans. Now, in light of the legislation, the same organizers of the May 18 event are planning a further civic action. Details will be forthcoming.

Until then, pray, study, and act.

P.S. Thank you for your ongoing support, both spiritual and financial! 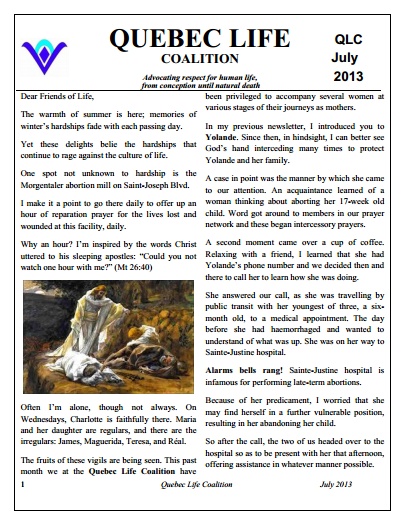 I wish to protect the elderly and the vulnerable from assisted suicide and euthanasia. Here's my donation to allow QLC to continue its important work.