I trust you have all had a blessed Christmas period.

I did and in a most unexpected manner.

Yes, there were the traditional joys of meeting friends and sharing meals.

In addition, as the New Year began, I received an unexpected phone call.

The caller was someone I knew well. He and his wife are faithful prayer warriors, active during our twice annual 40 Days for Life prayer vigils for the end of abortion. So faithful are they that they have been part of every single vigil we have organized since we first began them in Montreal, back in the spring of 2009 – an amazing eight campaigns!

On this day, another topic was on his mind. He was wondering whether I was free and willing to spend the afternoon with him laying down a primer coat in a couple of bedrooms of an apartment recently leased to an expectant mother.

Some background knowledge may be helpful at this point. The couple’s involvement during this past fall’s 40-day vigil took a most unexpected turn. They befriended a young woman anxious about her pregnancy. Under much parental pressure to abort her 19 week old child, she had gone to the Morgentaler facility, across the street from where we were praying. Fortunately, she left without aborting the child and came to speak to us and ever since we have been accompanying her.

The latest form of this support was the painting exercise.

Subsequently, I learned that the final coats were done that same evening and the following day. Further that the following Saturday, mother, father and child moved into a newly painted 4 ½, leaving their outgrown bachelor apartment behind.

So, as many of us were celebrating the arrival of the Christ child, I was privileged to spend some time helping an expected mother.

We are committed to help women who face untimely pregnancies and choose life for their babies.

Unfortunately, not all of our encounters with pregnant women end so well. In my previous newsletter I had asked for prayers for another expected mother. Despite our best efforts to help, this young woman decided to abort her child.

Such incidents are all too typical of Quebec society where there are over 30 000 abortions yearly. And these figures do not take into account the children lost to abortifacients such as the morning-after pill.

What can be done? Prayer and Politics.

As our twice-yearly prayer vigil for the end of abortion has continued to garner strength, Further, we have expanded upon this by providing a daily presence outside abortions mills.

Since the beginning of January 2012, I have gone to spend at least an hour each day near a local abortion mill in silent contemplative prayer. Often alone, sometimes accompanied by a few faithful, I act in faith that my prayers will be heard and change will come.

One sign that change is happening is the increase in number of post-abortive people joining me in prayer. Jean-Olivier experienced the abortion of his child this past fall. Despite his wishes to have the child, the mother believed otherwise and aborted. Since then, he has joined me at the vigil location.

Have a blessed New Year,

P. S. Our own prayer warrior, Maria, is pregnant and all is going well, though she is suffering from much nausea. Please keep mother and child in your prayers. 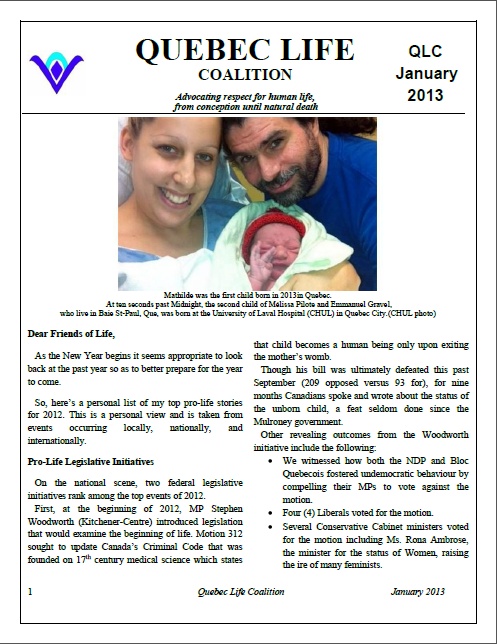