Get ready! We are about to begin the single, most effective way to end abortion: the 40 Days for Life prayer vigil.

On Ash Wednesday, February 13th, the Quebec Life Coalition will be starting its ninth vigil. Inaugurated here in Montreal back in the spring of 2009, after having gone nationwide in the United States two years earlier, we have consistently ran two vigils per year - one during the Lenten period of February and March, and the other in fall, usually spanning the month of October.

2013 is no different. On February 13th, we will be joining 260 other locations worldwide in this effort to end the scourge of abortion. The bulk of these may be found in our neighbour to the south of us – 225. As for our more proximate neighbours – i.e., the other Canadian provinces, there are seven vigils occurring simultaneously – two each in British Columbia (Victoria, Terrace) and Ontario (Guelph and Oakville) and three in Alberta (Calgary, Edmonton, and Red Deer).

An interesting footnote to this total of 261 vigil locations occurred some two weeks ago. One of the vigil teams needed to drop out for a surprising and good reason. The abortion facility at which it was planning to pray folded. Yes, employees were seen carting boxes and materials into a dumpster.

So, you see how effective prayer and fasting can be; we have yet to start and an abortion facility has already closed!

Also, statistics show how this kind of vigil can be the most effective means to ending abortion. Since this prayer vigil movement first began in College Station, Texas, in 2004, and spread across the United States and internationally, a slew of numbers show its effectiveness:

Here in Montreal, we are beginning to see the effects of our prayers as well. Our core team – i.e., persons who register online, has grown. The number of vigilers coming to the site to pray grows; I estimate a figure of 160 this past fall. And most importantly two Montreal mothers have elected to forego an abortion and give life to their child. Can there be any better sign that this?

Ash Wednesday, February 13th marks the beginning of the Lenten period, a time of year known for preparation, atonement. Christians around the world will begin to prepare themselves for the arrival of the holiest time of year – the Easter Tridium marked by the death and the resurrection of Our Lord Jesus Christ. Can I count on you to join us - through acts of prayer, fasting, almsgiving, self-denial, to remember the unborn and their mothers and fathers?

God alone can change hearts. God alone can end the scourge of abortion. Yet God needs our hands, feet, and voices to get his message of hope and mercy known.

Please join us this Lent, in prayer – whether in your homes, at your churches, or in Lahaie park, to make God’s message of hope and mercy.

P. S. In previous letters, I wrote to you about one of our faithful vigilers Maria and her pregnancy. Mother and child are progressing well, despite, the nausea that mother continues to experience. Again, your prayers are welcomed. 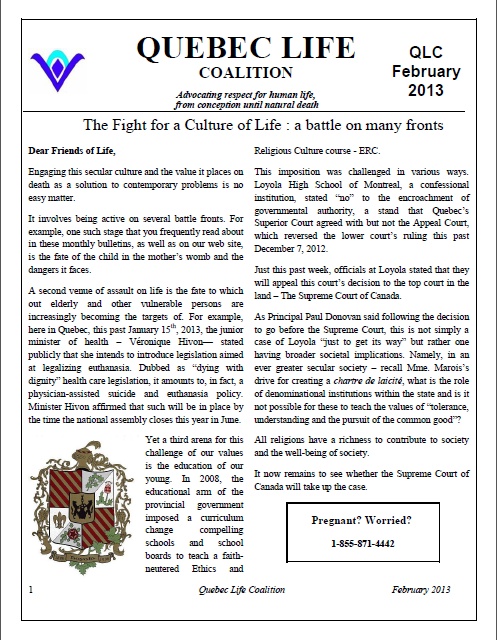