I trust you and your loved ones are enjoying this blessed summer.

It is a blessed summer, magnificent in its splendour. The weather, the fresh produce, the time for solitary walks, gatherings with friends and family, all contribute to making this season memorable. The harshness of winter and spring has rapidly been forgotten.

We at the Quebec Life Coalition are enjoying this time of year as well and doing so in a pro-life manner.

Our summer fundraiser exceeded our expectations, surpassing the goal we had established. Thank you for believing in our efforts and in the manner by which we are working to rid our society of the scourge of abortion. At the end of this letter, I share more concrete details about the fundraiser.

In terms of pro-life activities, our efforts reflect the tenor of the season – welcoming pilgrims and an outdoor social.

The pilgrims we are welcoming are the Crossroads Walkers. This is a group of college-age men and women who decided to spend their summer walking across our country for the cause of life. Six women and three men left Vancouver this past May and ever since have been slowly making their way eastward on foot. They will end their trek in Ottawa on August 9th. By the end of their walk, they will have travelled close to 6000 km.

This weekend they will be our guests here in Montreal. This will be the third consecutive year that we have hosted them. It begins this evening at Saint-Sylvain parish. The parish`s pro-life group has invited them to partake of their once per month gathering – adoration and mass.

On Saturday, their schedule will take them around town. They begin the day visiting Saint Joseph Oratory for Mass and taking in some of the sights. Afterwards they will walk to the Morgentaler mill via the Mont-Royal cross. On arriving at the mill, time with be spent in silent prayer followed by a picnic in Lahaie Park.

A brief period of free time follows the picnic after which the nine will split up in order to visit different faith communities. Six churches have opened their doors to them while here and these will get to her the group share what it has been like walking across our country. These talks will be given both Saturday evening and Sunday morning.

Once the speaking engagements are over on Sunday, more free-time is available to them. They can visit the shrines on and off the island or just laze around. Monday will then have arrived and before we know it they are leaving for Ste. Anne de Beaupré shrine outside Quebec City.

The outdoor social I noted above concerns yet another activity that we at the Quebec Life Coalition have integrated in our summers – our annual corn roast. This third edition of the outdoor classic will be held on the grounds of St-Émile church - 3330 rue Rivier, Montreal. Last year, under sunny skies, upwards of fifty people attended the afternoon event of corn and conversation.

This year we have added something new – an invited speaker. Father René Larochelle will provide some intellectual substance to accompany the material substance. The corn will be ready for serving at noon and the talk will begin at 2 p.m. and will last about an hour.

Finally, an activity not noted above but one that goes without saying is prayer. We know that the battles for establishing and fostering a culture of life are on-going even during the leisure months of summer. It is important to give thanks to God for the countless blessings he showers upon us and ask for his on-going support in our daily work.

Particularly important is the battle for life in regards to Bill 52, the provincial government’s euthanasia legislation. Little seems to be preventing it from becoming law of the land. Yet as believers we know that there is an even greater power than that of the men and women in our legislative houses who decide upon the outcome of this legislation.

p.s. As noted above, we are particularly buoyed by your response both materially and in prayer for the work we are doing. Many of you have been inspired to participate in our summer fundraiser to pledge in an unprecedented manner. Several became monthly donors. Others contributed substantial one-time amounts. I am deeply heartened by these responses. We had fixed our goal at $8500 and at month’s end, about $9500 has been received, representing over 110% response! Thank you. 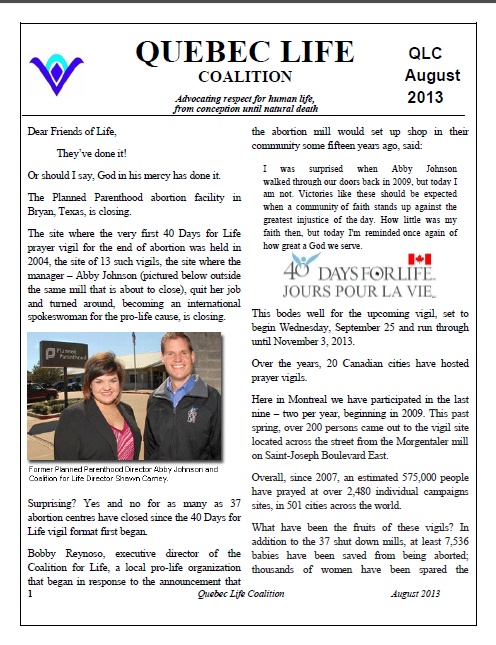