I would like to begin by thanking you for your on-going support - both in prayer and financially, of this pro-life work, particularly to those who responded to QLC President Georges Buscemi’s urgent appeal of this past month. Your donations have allowed us to maintain our current staffing levels, and for this we are grateful.

Earlier this month, I experienced the proverbial “Day that I will long be remembered,” a day filled with experiences typical of why we at the Quebec Life Coalition exist.

In reverse chronological order, I would like to share these with you. First, in late afternoon I learned that Bill 52, the so called “Medical aid in dying” legislation became law. MNAs voted 96-22 in favour of permitting physicians and medical staff, for the task will befall the nurses whom the doctors will ultimately coerce, to euthanize our fellow citizens.

We had laboured long with other groups both within and outside of Quebec to thwart the bill’s passage. In February of this year, we had won a minor victory as an election call had gutted its implementation. Yet the new legislature picked up where the old left off. We will continue to fight!

Earlier that same day, I was at Montreal’s Jewish General Hospital witnessing another drama in this battle for life, one involving life at its earliest stage. In the pediatric wing, I sat in wonder as technician and doctor performed an ultrasound on a five-month pregnant friend. For thirty minutes, I watched spellbound the unborn child resting in the mother’s womb.

Yet, during this scene of nascent life, death’s shadows crept in on two occasions. First, as the medical staff cautiously used its instruments to examine the child, mother and father asked whether the child was “perfect’” if there were any signs of trisomy.

On hearing this, I felt uncomfortable, wondering silently “What if there are? and “Does it matter?”

The technician’s response was negative, but had it come back Yes, what would be the child’s fate? Would it be loved?

No sooner had I gained some modicum of composure that I was startled a second time.

The staff adroitly moved the sonic probe over my friend’s abdomen gradually revealing on the video monitor the clitoral lips: it’s a girl.

The joy was obviously subdued. Mother said that she had hoped for a boy yet quickly reconciled herself. Father, on the other hand, remained unreconciled; His displeasure was palpable. Eventually, he asked “Could you be wrong?” His sullenness remained as we left the hospital and walked along Côte-des-Neiges, until we parted company.

Our expectations about life and how fragile it is were more evident from an experience earlier in the day. I had traveled to the hospital from the Morgentaler mill on Saint Joseph Blvd. There I had witnessed upwards to a dozen young ladies enter the building during my hour-long prayer vigil. That is, a dozen terminations of life over a sixty minute period in a mill open 8 hours per day, 5 days per week.

Is the battle to form a civilization of love a losing one? Amid these victories of death, you’d think so.

Yet, a different answer emerges from an event earlier on the same day. I began this day, as every other one, with the Eucharist. Here, I participate in the greatest act of sacrifice done anywhere by anyone, for all time. I witness the ultimate sign of victory, victory of life over death, of love over hate.

I then carry this victory with me and share it with those whom I meet.

Regardless of the arrival of euthanasia legislation, of the visceral reactions of parents, of the tens of women who present themselves daily at the Morgentaler mill, Christ has shown us the way to victory, to our salvation.

Once again, thank you for your on-going support - both in prayer and financially, of our pro-life efforts on behalf of the unborn and the vulnerable. 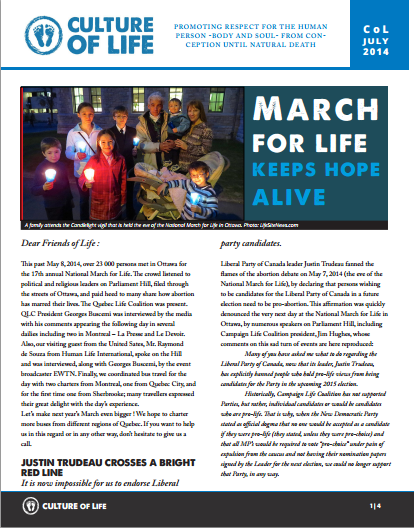