At this time of year, I become nostalgic, reminiscing about the past twelve months, the fond moments, the difficult trials of our pro-life ministry, so as to plan for the year ahead.

Here are a few moments that made 2013 memorable.

First, among the fondness of memories was your participation in the National March for Life in Ottawa, in early May. We needed to charter three buses for the day trip; that is, two more than in the previous years. Also, one of these traveled all the way from Quebec City!

Also vividly etched in my memories of 2013 was our annual Triduum for Life, particularly so was the presence of Montreal’s Auxiliary Bishop, Mgr. Thomas Dowd, in a mass and a candlelit Eucharistic procession with many of you outside of the Morgentaler Mill.

Next, in 2013 I was privileged to meet 25 intrepid women, outspoken on their commitment for life and all opposed to abortion, many of whom were post abortive. We met and prayed outside the former Morgentaler mill in East end Montreal, before they walked to Ottawa to attend the March for Life.

2013 also saw the death of Henry Morgentaler. His passing away into eternity was commemorated by a silent candlelight prayer service outside the abortion mill bearing his name on Saint Joseph Blvd., asking our Maker for the repose of his soul, hoping that he had renounced his slaughter of many innocents.

As the attacks on life are not restricted solely to the outset of life, 1700 of us met in Quebec City to denounce the government’s plan to permit the euthanasing of our fellow citizens. We were part of a two-bus convoy from Montreal to our provincial capital to have our voices heard

Finally, in 2013 we coordinated two 40-day prayer vigils for the end of abortion. These symbolize the bridgehead of the culture of life in our society rampant with attacks against life and our families.

The Frailty of Human Life

The most significant events of the year for me were our support of women and the life which they carry within them – the unborn child.

In 2013, I was blessed by three women in particular.

First, on March 15, Théofil was born. His mom had left the Morgentaler abortion mill the previous October and crossed the street to seek our help. Over the ensuing months, through varying trials, mother chose life for her child and on the fateful day, a boy was born.

The second woman I met, over the summer months, also chose life for her unborn child, though the situation was precarious. Having had two abortions in her early life and caring for three preterms – a 6 year old, a 2 year old, and a six-month infant, she had thought of aborting her latest. Circumstances proved otherwise and in early September she saw the fruit of labours – a little baby girl.

The third woman I met was also within the grasp of the abortionist. I met her as she left the abortion mill, seventeen-weeks pregnant with her second child. She was thinking of aborting so as to solve a difficult life situation.

As the procedure would last two days, I had two further chances to convince her that death is not a solution to the difficulties that come our way. In the end despite our efforts and support, she decided to abort the child.

These three women confirmed how frail and fleeting life can be. I saw this when I visited the preterm shortly after her birth and again when I saw the third mother leave the clinic the day she had aborted her 17-week-old.

With this new sensitivity, I pray that these latter experiences of 2013 may foster within all of us at Quebec Life Coalition and all our supporters greater resourcefulness and perseverance to be supportive of women to choose life for their unborn children

P. S. Congratulations are in order to the women who gave birth this past 2013, particularly those of whom join us in our ministry - Natalia, Maria del Pilar, Michele, and Monica. 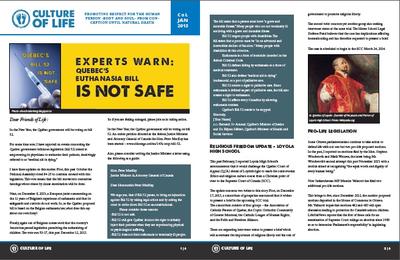