I trust this blog finds you all well.

Crossroads Canada pilgrims were making their final Montreal visit before heading out to Ste. Anne de Beaupré, outside Quebec City that same day. The twelve pro-life pilgrims had arrived Friday afternoon from Cornwall and had spent the weekend praying and witnessing to Montrealers about their cross-Canada walk that began in Vancouver this past May. Friday they were received at the St. Joseph's Oratory with a sunset picnic. Saturday, after a 10 a.m. mass at the Oratory and before a picnic in Lahaie park, they prayed for a solid two hours in front of the Morgentaler abortuary. Finally, Saturday evening and Sunday they meet various parish groups both in Montreal and on south shore Longueuil sharing their experience.

On Monday the young adults and their hosts gathered for a mid-day Mass at Mary Queen of the World Cathedral. Afterwards the group processed through the busy streets of Montreal with stops at St. Patrick Basilica and Bonsecours Chapel prior to arriving at Notre Dame. The walk proceeded fairly well, with the occasional heckler mouthing off. Fortunately there were also a few affirming honks and waves.

The pilgrims were warmly welcomed at Notre Dame. Quebec Life Coalition president Georges Buscemi greeted them with a special gift - T-shirts for each participant emblazoned with the pro-life message in French. This will be fitting attire for their trek through La Belle Province. After a photo shoot of the group with their new wear, 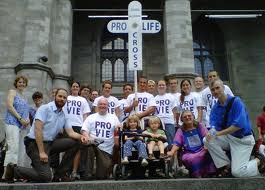 the lot of us proceeded to the basilica for prayer, oblivious to what awaited us.

In a nutshell, we were denied entry. (Personnel are posted at the entrance to greet and direct both visitors & pilgrims - the former, after payment, are admitted into the church while the latter into the small frontal chapel, free of charge. The latter is a glass enclosure in the nave set aside from the church for small Eucharistic celebrations, containing space for about 30 people, an altar and a tabernacle with the Blessed Sacrament.) We were told that our PRO-VIE t-shirts were inappropriate. A half-hour later and after some private negotiating between the pilgrims' leader - Michael Hayden, and the presiding clerical official, we eventually gained access into the chapel.

Once inside, the experience was spiritually powerful. It is difficult to recount. We were alone in the chapel. To a person, we knelt in silent meditation for some time. Afterwards, we recited the rosary and then listened to one of our group share how she had been divinely touched during the prayer with a message for all of us.  Namely, that our trial at entering the chapel this day was akin to the reception He had received in the synogogue in his home town. Upon exiting, I felt invigorated.

In conclusion, I understand that the basilica has been the site of disruptions in the past. Persons with political messages had entered the church and disrupted proceedings.  And so, norms have been set up to prevent future repeats. Yet, I think a revision is needed to the guidelines, permitting a distinction between a political message and a pastoral one.

Interested folks, can read further about this incident - here from the Lifesitenews article and here from the Crossroads pilgrims' blog site.