I trust this letter finds you well.

As for me, I am experiencing mixed feelings. On the one hand, President Obama re-election has me worried about the fate of the unborn, both south of the border and wherever U.S. policies extend. On the other hand, my faith assures me that I am on the right side as the following passage from the book of Proverbs asserts:

Trust in the Lord with all your heart and lean not on your own understanding;

in all your ways acknowledge Him and He shall direct your paths. (Pv. 3)

On the first point, Lila Rose outlines five points about which the President has failed to safeguard protection for the unborn.

Hence, my worry is not unwarranted.

Yet, as Susan Michele Tyrrell adroitly put it in a post-election commentary, we are called to put our trust in our Lord and not in men.

Though pro-lifers are disappointed, grieved and even angry, we must remember that our call to LIFE and prayer has never changed. This isn’t a time to spew negativity or fight with natural weapons. Never have we needed to pray as we do in this critical hour. No man is our answer apart from Jesus, and He wasn’t the least bit surprised. Before the foundation of the world, He knew we’d re-elect President Obama tonight. We absolutely cannot forget the word of the Lord in Romans which says:

13 Let every soul be subject to the governing authorities. For there is no authority except from God, and the authorities that exist are appointed by God. Therefore whoever resists the authority resists the ordinance of God, and those who resist will bring judgment on themselves. For rulers are not a terror to good works, but to evil. Do you want to be unafraid of the authority? Do what is good, and you will have praise from the same.

And so we continue in faith. We believe that the unborn child has value and deserves to be protected. This cause has permitted us to hold eight 40-day prayer vigils in one of the most liberal area of Montreal if not Canada. Faith spurs us on to defend life at of its stages, from conception until natural death. Faith sustains us as we continue to build via organizing conferences, helping pregnant women, comforting those who have experienced an abortion. We believe that we can change hearts.

Thank you for supporting us on this journey, both spiritually and financially. 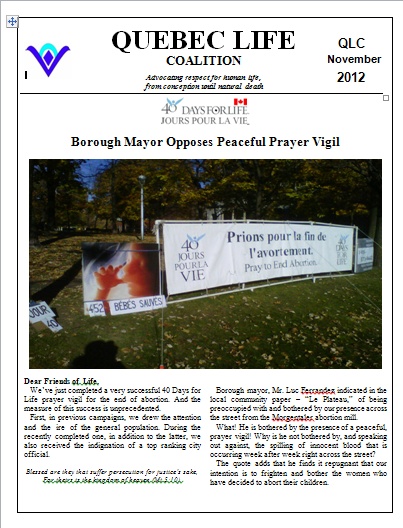