As you read this newsletter, we are about to begin the second half of the 40 Days for Life prayer vigil for the end of abortion.

This vigil’s goal is to tap into the God’ munificence via prayer and sacrifice so that the gift of life be ever more seen and esteemed by ourselves and all members of our society.

Since, Wednesday, September 26, 2018, the vigil has been going on daily from 8 a.m. to 5 p.m., seven days a week, at the corner of Berri and St-Catherine streets in downtown Montreal, where five abortion centres ply their deadly commerce.

Below are excerpts from the vigil log; offered for your reading enjoyment and prayerful support:

A sunny day brought more people onto the streets than the previous rainy day. So, more persons walked by the vigil location, many of whom expressing themselves either in favour or not about our presence. I figured the nay sayers outnumbered the yeahs, two to one.

One naysayer surprised me. In mid-afternoon, while praying, I was startled out my revelry by a slight pressure on my back. No sooner, a young appeared before me drawing a large X with a black felt marker on the sign hanging in front of me. He then scurried off.

Removing the signs, I noticed that both had a double X mark swathed on them. Wasting little time, I tried to remove the marks but had limited success.

Then Claude, one of the prayer volunteers, arrived. Quite naturally he offered me his alcohol-based hand cleaner along with a sac of Kleenex. He applied the liquid adroitly along the marks and I worked with the wipes. To my amazement the marks came off easily with no lasting impressions!

Claude was a God send, coming at just the right moment with the right tools. Need I add that alcohol cleaner and wipes are a daily tool I carry with me!

As the Life Chain is scheduled for this afternoon, a half day will be spent at the vigil location, from 8 a.m. to 1 p.m. before moving to join

On this overcast day we had multiple interactions with the public, some civilised and others more emotive.

By emotive, I think of three persons – two women and one man, all of whom shouted at us before continuing their way. One lady shouted as she walked by “abat aux obscurantists.” She was followed by a young man who shouted “anti-choix; allez-vous en!” as he cycled by. Finally, near the end of the day, another female pedestrian stopped and shouted for us to go to hell, us and our religion. (How she knew our religion remains to be seen!)

A positive exchange occurred for both Charlotte and I separately. A woman berated Charlotte at first but an exchange followed, particularly so when a man stopped to engage the woman. With me, a young woman stopped to learn my views about rape, my faith, and abstaining until after marriage.

This day many persons dropped by the vigil location to chat and encourage those of us on hand to persevere.

Of this latter group, at the outset of the day were an older gentleman and young Hispanic woman. In the latter part of the morning, Gordon (28) a street evangelizer stopped to chat and blessed me before leaving; we both remember meeting each other at a previous vigil. Charlotte was the recipient of some lauds, with one woman offering her a twoonie. (Interestingly, unlike previous vigils persons have been offering us, particularly Charlotte some monetary gifts - $1, $2, $5)

In the afternoon three visitors came, two of whom chatted for some time – Serge and Joseph. I had 40-minute chats with both. Serge and I saw eye-to-eye on many issues whereas Joseph made me feel uncomfortable on numerous occasions. The latter, a professed Christian, had the tendency during our talk to point his finger at passers-by and stating a judgment about them – “she’s pro abortion”, “him, a good person.. The conversation and exchange flowed better with Serge whereas with Joseph I found myself more listening and questioning the numerous claims he was making. I found he was lacking in mercy.

The third person, Charles, came just as I was closing out the day and when I emerged from 5 p.m. mass he was there with Joseph along with a police officer in conversation.

Today’s highlight was the interview by a dozen or so UQAM journalism students.

At around mid-afternoon, I had no sooner taken a break that a first group of four students and then a second and a third approached me almost simultaneously. Young men and women questioned me about what I was doing, why, the support to pregnant women we offer. I gave concrete details about the latter. Finally satisfied, photos were taken and they were off.

I mustn’t forget the post-abortive woman (mid-twenties) who collapsed next to the metro aedicula. This occurred around 11:20 a.m. She was assisted by a male and female of about the same age. I offered the phone no. of a colleague who does post-abortion counselling.

Among the prayer volunteers and well-wishers who came and went on this day are Carlos, Suzanne, Alejandra, Charlotte, Denis, Mary and her son Denison.

Comments heard: young woman: “you should be ashamed of what you are doing,” and an older woman: « Vous faites pitié, Monsieur. »

Because of laws and the construction occurring in the vicinity of the vigil location ( I counted five work sites all in visible range of our prayer location), we have an obstructed line of sight to the two abortion centres close at hand. Yet, this day a veil was parted briefly permitting Charlotte and I to witness the tragedy going on.

In sum three couples travelled through our prayer site, proceeding into the clinics and one of the women noticeably feeling the impact of the abortion on returning needing aid from the man accompanying her.

The latter incident particularly affected Charlotte.. The woman needed visible assistance and comfort from her partner to make her way to the metro. Never had we a greater need for our presence to point out the butchering going on.

Our presence on the streets of Montreal brings the love of Christ front and centre, not only to the men and women seeking to end of the lives of their unborn children, but also to the many others who are struggling and who have forgotten God.

Thank you for your support to make this initiative possible. 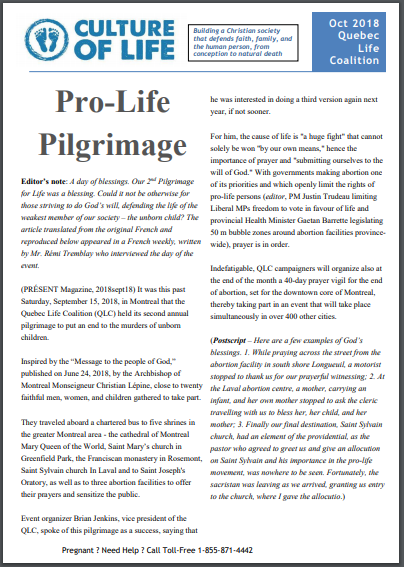