Thinking of the Unborn this Christmas Season

Here at the Quebec Life Coalition, as the year 2011 comes to a close, we wish to thank you for your generous support over the past year. Together we have been able to work on building a more just society, one that defends life, from the womb until old age, respecting all persons, irrespective of handicaps and health.

In this period, two issues have garnered most of our time and resources – the abortion and the euthanasia/assisted suicide issues.

In the abortion debate, over the past year we have been active in various ways. For example, this past May, we forcefully brought our message before our elected officials as we chartered a bus and travelled to our nation's capital to participate in the National March for Life.

Again in May, we also visited our provincial capital, carrying our message of life with us. These we held our annual congress, with distinguished speakers promoting the family. This is no small feat in a Quebec society that is more akin to a culture of death for, lest we forget, the Quebec National Assembly voted 109-0 (out of 125 members) on May 18, 2010, in favour of a woman's right to choose and the right to abortion.

In addition to having carried our pro-life message to politicians, twice this year we brought it to the public. For 40 days each time, we coordinated peaceful, prayerful vigils outside one of the more infamous abortion mills in the country right here in Montreal, daily from 7 a.m. to 7 p.m. As for the second topic, euthanasia is occupying more of our attention over the next little while. Currently British Columbia courts are listening to arguments regarding the constitutionality of Canada's laws opposing euthanasia and assisted suicide. A woman with degenerative muscle syndrome – amyotrophic lateral sclerosis or Lou Gehrig's disease, is challenging the laws preventing her to end her life.

We at the Quebec Life Coalition are watching the unfolding of this story closely as well as the relating articles and events stemming from this court proceeding.

Your contributions, either on-going or occasional basis, will permit us to keep abreast of these as well as a few new fronts such as:

Again all of our work – including this monthly newsletter and our new pregnancy toll-free help line, would not be possible without a core group of individuals out there supporting us spiritually and financially.

Wishing one and all a blessed Christmas!

p.s. We are in the second week of our Christmas fundraising campaign -- Thanks for donating; no amount is too great or too small ! 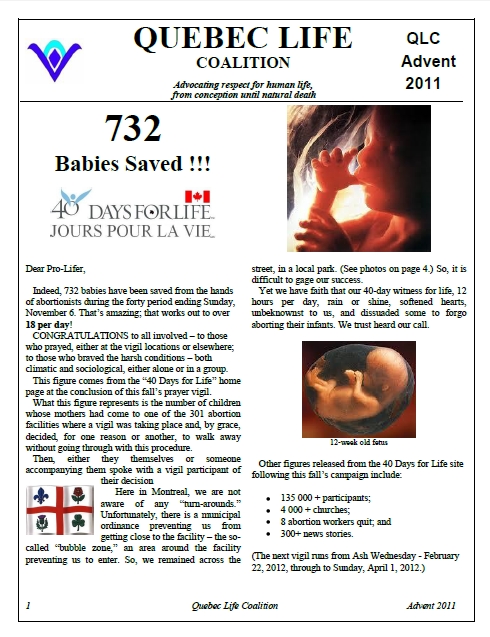