The Media and the Vigil

This past Sunday, November 4th, 2018, we completed our twentieth 40-day prayer vigil for the end of abortion.

Begun in Montreal in 2009 by QLC President Mr. Georges Buscemi, this twice-yearly prayer vigil has taken place every year since, moving from its original site on Saint Joseph Blvd. East to the intersection of Berri and St-Catherine streets when the Morgentaler abortion centre relocated near there in 2014.

This past fall the Montreal site was one of over 400 vigils occurring simultaneously worldwide, which since the inception in 2003 of the 40 Days for Life vigils over 15 000 babies have been spared from abortion through prayer and fasting, and timely information about resources to pregnant women. And that’s 15 000 that we’re aware of!

To quote the movement’s founder, Shawn Carney, “Abortion was imposed upon the world by the highest levels of government. But abortion is ending from the ground up through the faith and fortitude of pro-life Christians like you.”

We are already preparing the next vigil, set to begin on Ash Wednesday – March 6, 2019. Consider joining us to end the culture of abortion in Quebec.

Two signs from this past vigil spur our efforts on.

An unborn child is a human person

whose life has value and deserves to be protected by our society.

As Mr. Carney aptly cites Scriptures, our presence on the streets fulfills our creator’s wishes for us, “For I know the plans I have for you… plans for good and not for disaster, to give you a future and a hope.”

As people of the Good News, we need to counter the mainstream message about the “right” to abortion, reinforced by the media, government officials, entertainment personalities, and pressure groups.

A second result from this past vigil was the interview of Mr. Buscemi on a local radio station which operates directly across the street from the vigil site. Daily the staff walked by us on their way in and out of the station, seeing us and our signs. 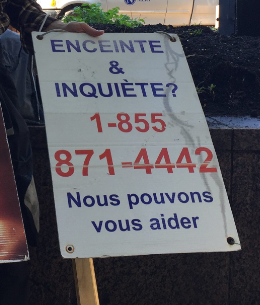 Our pregnancy support sign (the one indicating our toll-free crisis-pregnancy telephone line number) caught the eye of one radio host and incited her to clandestinely call posing as a needy 24 year-old pregnant woman.

“Both faith and reason agree that 'Abortion is murder',” was the clear message he intoned to his hosts and to the radio audience during the 14-minute interview.

He also covered the question whether abortion is justified if the woman conceives when raped – “Should a child be condemned for the crime of his father?”, as well as noted that respect for the unborn does not undermine in anyway whatsoever respect due the mother.

Your presence at the next prayer vigil, beginning on Ash Wednesday, March 6, 2019, will further the work of Mr. Buscemi to foster faith and reason and so rebuild our culture into a culture of life.

Your help is needed. Consider:

In any and all of these ways, we cover ourselves with the love of Christ so that the lives of our unborn brothers and sisters will not be trampled upon.

Thank you for your support to make this initiative possible. 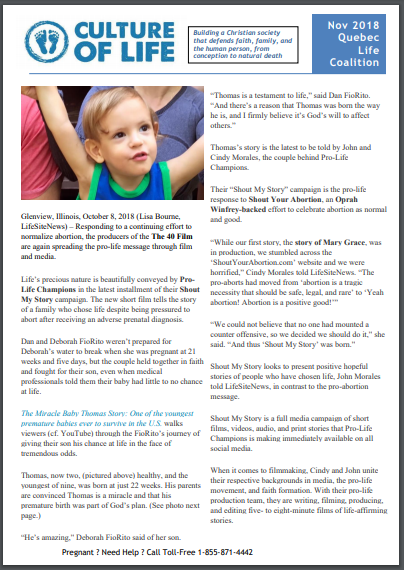