The Abortion Ice-Age in Canada: a Thaw is Coming 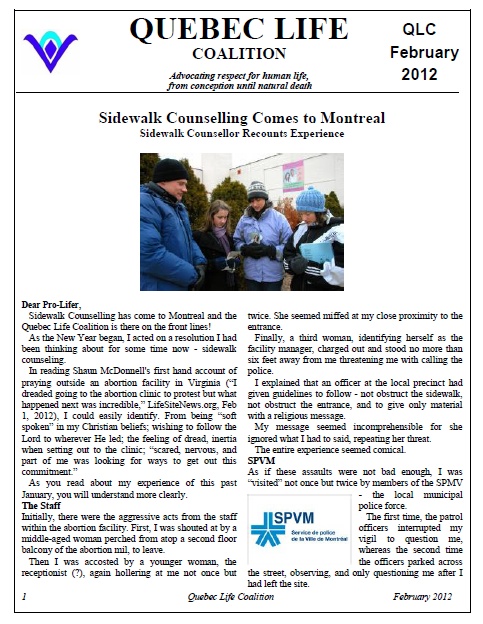 If you are anything like me, you are probably rejoicing with each passing day. Not only are we enjoying more daylight but also a stronger sun. Winter's end is near. (Click here for the February Newsletter !)

Could it also be, in the light of recent events, that the end of Canada's abortion winter is near? Is the era of free and unrestricted abortion is ending?

We at the Quebec Life Coalition think so and you can helpmake this happen. More about this in a moment.

First, the abortion thaw is underway. During the first week of February, the Honourable Stephen Woodworth, the Member of Parliament for Kitchener Center, Ontario, took a big step at thawing the abortion winter which has blanketed our land since 1968.

It was back in 1968 that Justice Minister Pierre Trudeau introduced legislation that permitted the performance of abortions in hospitals provided a three-doctor panel judged the medical merit of the procedure for the particular woman.

Since this decision, the Conservatives have tried to write legislation but to no avail. And so at any time during her pregnancy and for any reason, a woman can have an abortion.

Will the step taken by Conservative member from Ontario be able to achieve legislative distinction?

And so on Monday, February 6, Mr. Woodworth took a step in this direction. His press release begins:

Today MP Stephen Woodworth filed a Motion with the Clerk of the House of Commons to ask Parliament to form a special Committee to study Canada's 400 year old definition of human being and report back to the House on the medical evidence it finds and on options to deal with this archaic law.

The 400 year old definition states that a child is a human being only at the moment of complete birth.

Yet, medical science, observes Mr. Woodworth, has progressed since this seventeenth century legislation on which Canadian law is based. A revision is due.

And not only a revision but also an evaluation of its implications, guided by the following questions:

Also, we at the Quebec Life Coalition have found a way to contribute to this thaw, with a little help from you.

Included herewith, you will find a form to be filled and included with your provincial income tax statement. It is addressed to the minister of Finance requesting that your tax monies targeted for provincially funded abortions be refunded to you.

So, we encourage you to fill in the form below and to submit it along with your tax return.

Along with the initiative of Mr. Woodworth, you will be contributing to ending abortion's winter reign.

Many thanks for your continued support,

As a special offer and to commemorate the "40 Days for Life" prayer vigil – from Wednesday, February 22, to Sunday, April 1, 2012, both new donors and regulars who respond to this month's appeal will receive a complimentary "40 Days for Life" t-shirt.