I am writing these words the day after the March for Life in Ottawa, Thursday, May 10, 2018. It was a great success, with nearly 15,000 people having braved the rainy weather.

The day began with several Masses, including at Notre-Dame Cathedral Basilica, at St. Patrick's Basilica, and, according to the extraordinary form, at St. Clement church which I attended.

At the conclusion of the Mass at Saint Clement, some thirty of us processed with a six foot cross, from the church to Parliament Hill while reciting the rosary and other prayers. Honouring Our Saviour and re-enacting a Christian tradition dating back to the seventh century, we – men, and women, and children, traveled through the lower town section of Ottawa and into the busy Byward market area in full witness to commuters, homeless, lunchtimers, and locals.

At around noon, and after a picnic in Major’s Hill Park, sis near the Parliamentary grounds and along the Rideau Canal, we joined the crowds gathering in large numbers on the Hill.

Among the participants, we were pleased to see sisters from the Mater Dei congregation having come from the diocese of Saint-Jérôme and attending their very first march. Their presence this day was meaningful. A recent incident involving the support of a woman in a crisis pregnancy spurred the community and a few of their supporters to charter a bus the week prior to the march. Grace was at work as no sooner had they begun to advertise the pilgrimage that half of the 56-seat coach was filled!

A familiar participant was the dynamic contingent from the diocese of Sherbrooke. Laypeople working with religious from the men’s Missionaries of the Gospel once again filled a bus, allowing for boarding in Granby on the way to Ottawa and back. This group coordinated a gathering on the steps of the Supreme Court of Canada – see below.

Finally, a charter from Quebec City attended this year thanks to Quebec Life Coalition’s own Mario Richard. Almost single-handedly and working from our Montreal office, Mario was able to fill a bus of pilgrims-for-the-day. Nineteen of the twenty-one seats of the Quebec City coach were filled and there had been three last minute cancellations! Further, Mario endured not only two five-hour trips in a single day (Quebec City to Ottawa an back), but also traveled to Quebec City the eve and back to Montreal the day-after. Quite a testimony of stamina and dedication! Thanks, Mario.

We were blessed by the presence of dedicated pro-life dignitaries including many bishops, five of whom were from Quebec including Cardinal Lacroix of Quebec and Archbishop Lépine of Montreal, and politicians, such as Conservative MP the Hon. Harold Albrecht.

On the Hill, I took the opportunity to bring our petition of nearly 5,000 names against the unfair discrimination of Prime Minister Trudeau and his party against pro-lifers and Christians of Canada. As you know, the Prime Minister is relentless in his hostility towards believers and pro-lifers to the point of excluding these from his caucus.

In December, his government made it mandatory for all organizations wishing to obtain government grants to hire students during the summer, to sign a statement that they agreed with the abortion, the "Gay Marriage" and the "transgenderism."

After the march and at 3 pm, many gathered on the Hill to hear the testimony of post-abortive women and men, while a second group of us, nearly a hundred met on the grounds of the Supreme Court of Canada, a few steps west of Parliament, for a short presentation on issues of faith, family, and life, from conception to natural death.

At the conclusion of the latter it was time to board our buses and return to Montreal.

So once again we were able to send a strong message to the men and women in power: "You have a duty to promote faith, family and life. You must protect the weakest, especially the unborn children who are victims of abortion and the vulnerable people targeted by euthanasia! "

Throughout the day, we broadcast live events on our Facebook page. You can watch the videos by visiting https://www.facebook.com/CampagneQuebecVie.

p.s. The organization of this day would not have been possible without you. Through your generous donations, you help us educate our fellow citizens and politicians. 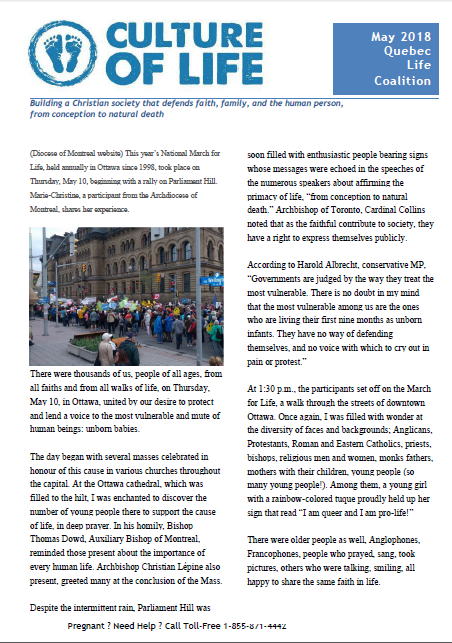