Here are a couple of handy references for your perusal.

"The Unborn Child: A Gift, a Treasure, and a Promise," issued by the Catholic Organization for Life and Family, provides readers with an introductory panorama of the abortion issue.

Described as a "Reflection on Abortion," the twelve-page reference is ordered under ten headings posed as questions. These are:

1. When does life begin?; 2. What is an abortion?; 3. Is abortion legal in Canada?; 4. Why do women have abortions?; 5. But isn't abortion a woman's right and a private choice?; 6. How does abortion impact a woman's life?; 7. What is "post-abortion survivor syndrome"?; 8. What is the Church's position on abortion?; 9. Are there alternatives to abortion?; 10. As citizens, what can we do to promote a culture of life?.

It concludes solidly in two respects. First, it lists a range of resources, equally available for anglophones and francophones and, secondly, mobilizes interested individuals on how to take action, either alone or collectively, in ten ways.

The second publication is a timely document issued by the Canadian Conference of Catholic Bishops, "Pastoral Letter on Freedom of Conscience and Religion".

As it notes at the outset, both in Canada and abroad a disturbing trend of "bias, prejudice, hate propaganda, discrimination, and persecution because of religious beliefs" is raging.

At home, we are not unfamiliar with the many assaults to people and groups for their faith. We see, in Manitoba, civil servants reprimanded or fired for not officiating in same-sex "marriages," in Quebec, parents compelled to have their children sit in on Ethics and Religious Culture courses that have watered down the Christian faith, and in Ontario, the provincial government legislating schools - including Catholic ones, to sponsor "gay-straight alliance" clubs.

Finally, both documents are fully referenced - via either endnotes or footnotes, and are available in either French or English from their respective issuers.

In conclusion, I think that a study of these two documents is important as it will better inform and prepare oneself for the trying times we are currently experiencing. 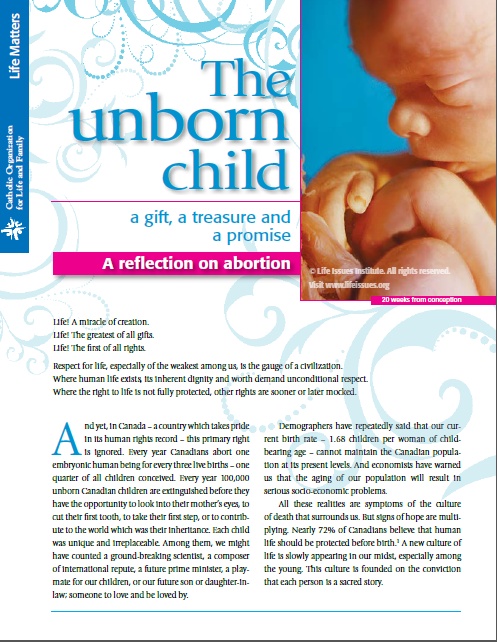