Something most unusual happened while bicycling one early Saturday morning.

My attention was drawn to an object falling some fifty yards ahead of me.

As I approached the spot on the roadway where it had landed, a second fell nearby on the sidewalk. To my surprise and puzzlement, I saw two tiny infant squirrels, both visibly shaken by the experience – whimpering, struggling to move, the one on the sidewalk the worst off.

Looking upward into the tree from whence they had come, my bewilderment continued as a third was being tossed, landing on the grass several feet from where I stood.

Wondering how to help, I was immediately confronted by the culprit. An adult squirrel came down the tree and began to inflict additional harm to the one near the trees.

To my surprise witnessing these acts of cruelty had aroused more visceral reaction in me than the fate that happens on a daily basis to members of my own specie through abortion and euthanasia.

From a human point of view, for euthanasia, I would say if we legalize this now, how do you think your great-great-grand-children are going to die? Why have we held on trust this value that we must not intentionally kill each other for thousands of years, and then at the beginning of the 21st century, we throw that out and say, “What were we talking about?” I was debating an Australian politician who said that when we pass our best-before date, we should be checked out as efficiently as possible. We are not products to be kicked out of the supermarket of life.

As a society have we lost all visceral sense to the tragedies occurring to our own kind and substituting this for that to the lower creatures.

Somerville seems to think so.

Whether you believe in human exceptionalism matters – that humans are different in kind from other animals – or are we just different in degree? I believe that not seeing humans as special in some ways is currently the world’s most dangerous idea. If you’d do it to your dog, you’d do it to your mother. I think this is the single, biggest, values-ethical-moral-philosophical decision of the 21st century. If we legalize euthanasia, I can’t believe the Supreme Court has done this. I was asked to help draft legislation, only by people who are concerned about it, not by the government. I wrote a letter to Justice Minister Peter MacKay and said you can’t go with this. I thought he should use the notwithstanding clause.
It is a momentous decision. It’s a seismic shift in our most important foundational values, the respect for life.

The Judeo-Christian worldview is an affirming one, in which mankind is made in the image and likeness of God. Our origin is first and foremost the result of a loving God wishing to have us share in His plan of creation, a plan in which love is central and paramount rather than random processes and chromosomal mutations that the secular evolutionary people espouse.

We do not deny evolutionary model is but critically view it as a theory which our intellect can inspect, evaluating its foundational truths.

In addition to our reasoning capacity, the Judeo-Christian worldview is not a predetermined, wound up unfolding but one in which volition plays a role. As free agents we elect between good and evil, right and wrong in our deliberations of exercising our values.

I pray that we do not lose our compassion for all of God’s creation – animal, vegetable, and mineral, nor neglect that for the highest among these – our brothers and sisters. 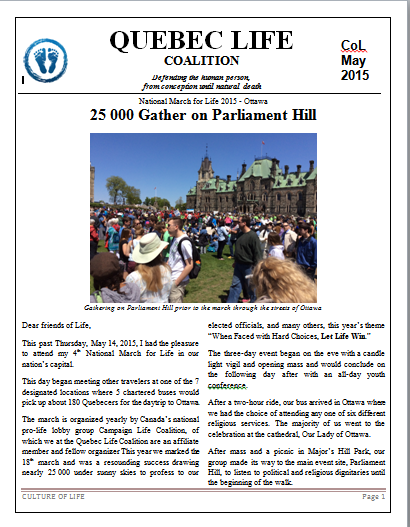