Blessed Christmas greetings to you and your loved ones.

I think God is smiling at us in the pro-life movement right here in Montreal.

As many of us are awaiting the arrival of the unborn Jesus on Christmas day, no fewer than four other unborn children have entered our lives over the past few weeks.

In the November newsletter, I wrote to you how during the recently completed Forty Days for Life prayer vigil for the end of abortion, we were visited by two pregnant moms seeking aid. Well, the dramas of these continue, for both good and ill.

In the first instance, mother and child have continued their course towards that day of their own nativity. A young woman came to us at about the mid-way point of the vigil. Anxious and alone, and frustrated by the treatment she had received at the Morgentaler mill, she sought our help and we have accompanied ever since. A couple within our prayer network have shouldered her along a bumpy road, helping where need be – sharing coffee and meals, shopping for winter clothing, and more. Their generosity has even covered various personal expenses. Though anxieties remain, she is cautiously progressing to that day of her delivery.

The second case is not as encouraging, reminiscent of the fate of the holy innocents which Sacred Scriptures narrates. The latter were those young children who were slain at the hands of an insecure and jealous king gone mad for fear of losing his kingdom at the hands of the Christ-child (Matthew 2:16-18). A similar fate occurred here in Montreal.

On the final weekend of the vigil we were visited by 20 year old Jean-Olivier. His girl-friend (18), four-weeks pregnant, was intent on aborting their child. He was crestfallen, recognizing the uniqueness of the child and desiring to be a father. He chain smoked during our conversation as well as in subsequent meetings.

His girl-friend, Linda busy with school and on a limited budget believed that now was not the right time, she could become pregnant at some future time, she reasoned. In the end, her academic ambitions reigned supreme and would not be usurped by the arrival of a little innocent one. She aborted her child two weeks ago.

The outcome of the third of these God sent children remains undetermined. Leila called at the beginning of this week. She was desperate. Eight-weeks pregnant, she was adamant about aborting her child. On calling a pregnancy resource centre, she was given a list of abortion mills. Fortunately, each had refused her because she lacked the $600 or $700 needed for the procedure. (As a foreign national, she does not have Medicare coverage and needs to pay up front.). She haggled; she would pay in instalments but was consistently refused. Providence led her with our phone number and so she called seeking to borrow money.

I listened to her story and mentioned that I would get back to her. I found a sympathetic woman, a female acquaintance, as pro-life as I am, and explained the situation to her. She agreed to call Leila. I subsequently learned that the conversation went well, that the issue was one of money for Leila wanted to keep the child but for lack of money she was desperate. I assured my acquaintance that money would be found to help her. The two were to meet the following day over coffee and discuss the matter more. Three children. Three stories.

At this time of the year we turn our attention ever more intently on the wonder of a new born, Our Saviour, nestled in the womb of his blessed mother. I think our pre-born Saviour is smiling at us, urging us along through these infants. Please use the accompanied Christmas gift to pray for these and other women who become dependent on the vultures found in our Culture of death.

May the Holy Spirit accompany you in your diocesan ministry in 2013.

p.s. Earlier, I had mentioned four pre-natal children. It is with delight that I learned that one of our faithful prayer warriors, Maria, is pregnant. Please pray for her during these early stages of her pregnancy. 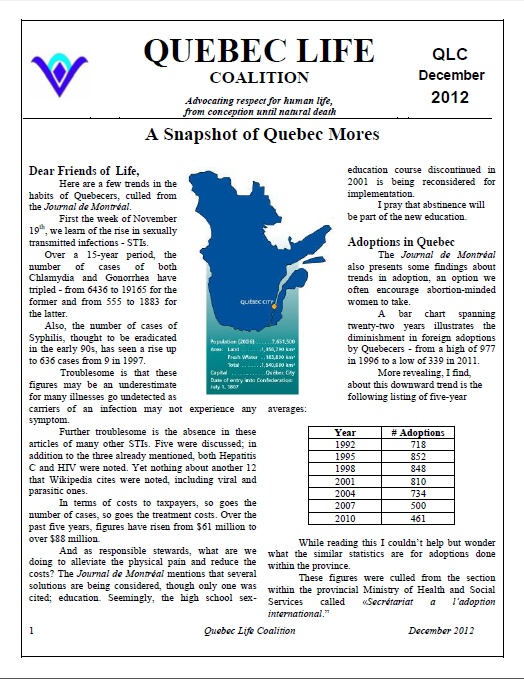