We live in a violent society. In an effort to address this violence particularly against women and girls, MP Mark Warawa and other MPs have banded together to raise awareness nationally. Their press conference, issued today and noted below, falls on Day 11 of the international campaign entitled "16 Days of Activism Against Gender Violence."

MP’s Join to Call on Canadians

to Help End Violence Against Women and Girls 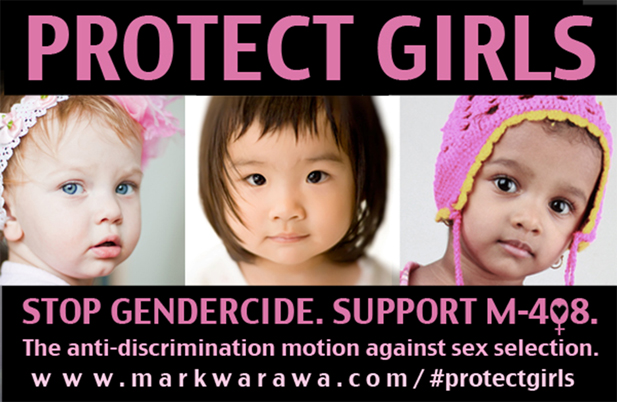 Ottawa, ON – Today Mark Warawa, Member of Parliament for Langley, was joined by several other MP’s in announcing a national call to action for all Canadians to work together to end violence against women and girls, during the international 16 Days of Activism Against Gender Violence.

“As part of the activism being undertaken, we encourage Canadians to #protectgirls and Support #M408”, says Warawa. Motion 408 calls on Parliament to condemn discrimination against females occurring through sex-selective pregnancy termination. MP Warawa declared December 5, Day 11 of the campaign, as Protect Girls, Support M408 Day and launched a public campaign as part of the activism.

Kildonan-St. Paul MP Joy Smith says “"It is a human right not to be discriminated against under Canadian law. Gendercide is discrimination against females. I applaud MP Warawa for putting M-408 forward to raise awareness of this issue. I urge all Canadians to support it, to ensure the protection of girls."

“MPs are also seeing the issue of gendercide being talked about across Canada in all cultures,” says Mississauga South MP Stella Ambler. “Canada is a leader in human rights around the world, and that is because we take action when atrocities, like gendercide, are committed. All parties in this House have condemned sex-selection.”

Saskatoon-Rosetown-Biggar MP Kelly Block commended the groups and individuals that have worked very hard to raise awareness of M-408 and have lobbied for its passage. "By raising awareness on this issue, these groups and individuals truly are the defenders of gender equality and the protection of women and girls against discrimination. By supporting M-408 we are affirming our value of gender equality here in Canada", says Block.

“Canadian’s have been asking us for a cohesive venue to declare their support for this motion,” says Warawa. “We have responded with these calls to action:

“The issue of female gendercide is being discussed openly across Canada and internationally,” says Warawa. “We are calling on all Canadians to work together to end violence against women and girls, to send a message of acceptance that women are valued in Canada and to stop this discrimination, protect girls and support M-408.”

M-408 is in response to numerous inquiries and concerns my office received after the CBC presented an investigation on gender selection last June. With hidden cameras, the CBC visited 22 private ultrasound clinics in Canada. They found that most of these clinics allowed ultrasounds to determine the gender so parents could choose to terminate the pregnancy if the unborn child was a female.

Gender selection has been strongly condemned by all national political parties. As well, the Society of Obstetricians and Gynecologists of Canada have vehemently opposed sex-selection pregnancy termination.