A provincial election is expected to take place on or before October 3, 2022, and a relatively new party may surprise persons on election day – the Conservative Party of Quebec (CPQ).

The current party leader is Éric Duhaime, a former columnist and pictured below. Ms. Claire Samson became the party’s first and only member in the legislature, having been elected as a candidate representing the Coalition Avenir Québec party in the 2018 election, but leaving to join the CPQ in June 2021. 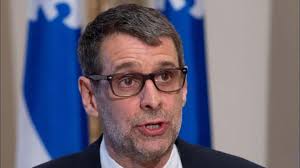 What to think about Mr. Duhaime and the CPQ? Particularly as an election is looming on the horizon?

This is the question which Quebec Life Coalition (QLC) President Mr. Georges Buscemi addresses to the French readership of the QLC in this month’s newsletter. I include selected extracts, which I have translated, in the lines below.

A first point that Mr. Buscemi makes about Mr. Duhaime is his charismatic personality.

After a lopsided victory in the CPQ leadership race last year, he knew how to augment the membership roll of the party from 500 members to about 57 000, rivaling that of the CAQ (the governing party). Furthermore, current public opinion polls rank the CPQ second, behind the CAQ but ahead of both the Liberal and Parti Québécois parties. Such leaves no doubt about Mr. Duhaime's talent as a communicator and (of his) popularity.

Unfortunately, he publicly expresses his gay lifestyle. Moreover, he has a habit of brandishing his "minority status" as a talisman to neutralize the criticisms of leftists and progressives towards him. It is as if to say: “do not criticize me unduly, dear friends …, because you know that I am not one of those 'backward' conservatives, I am a gay person!”

Mr. Buscemi believes that such an avowal is a ploy, though sincere, by Mr. Duhaime to shield himself from the current anti-conservative narrative that runs in Quebec’s social and mediatic circles.

This annoying behavior, although understandable in the Quebec context, where any deviation from the Quebec progressive doxa is severely punished in the influential media, becomes a cause of scandal and acts as a sanction for the serious "lifestyle" sin by Monsieur Duhaime. It is not surprising, then, that some see in him not a real alternative to the rotten system embodied by (premier) François Legault's CAQ, but a controlled opposition: artificial, ineffective, and even accomplice. What to do then? Abstain from voting?

To these questions, Mr. Buscemi replies that one must first and foremost examine each candidate in one’s riding to discern his or her personal views regarding faith, family, and life. Yes, the party leader and the party platform are important determinants but subordinate to the values of the candidate on the election ballot.

As for the party’s policy commitments, as found on the party’s webpage, Mr. Buscemi notes several importance features:

- Better support families and encourage the birth rate (section 3.2.2)
- Better support seniors and their caregivers (3.2.3)
- Affirm parental primacy as a fundamental principle of family law (3.2.4)
- Democratize school choice by allowing all parents to choose (5.2.1)
- Ensure the growth of the Quebec culture in the context of the low birthrate and the aging population (6.2.2)

Although the party platform is silent on matters of abortion, euthanasia, and the like, Mr. Buscemi doubts that frontal attacks on such travesties would further the party growth in the current decadent climate.

In conclusion, Mr. Buscemi notes that yes, Mr. Duhaime’s lifestyle choice poses a danger to himself and is a scandal to others. Yet, the party which he leads contains quality policies that are far from insignificant.

Three choices - A pro-life person can vote this autumn for a candidate in this party, especially if the latter is solidly pro-family and pro-life. Else, if the candidate is neither, the CPQ may still be chosen if this avoids a worse candidate or party. And finally, a third option would be to annul one’s ballot, sending the message that no candidate worthy of the high calling of being an elected official was on the ballot.

p.s. By clinking on the image below, you will access this month's newsletter. Your financial support helps defray the charge of the printing and mailing it to those unable to use the internet. Thanks. 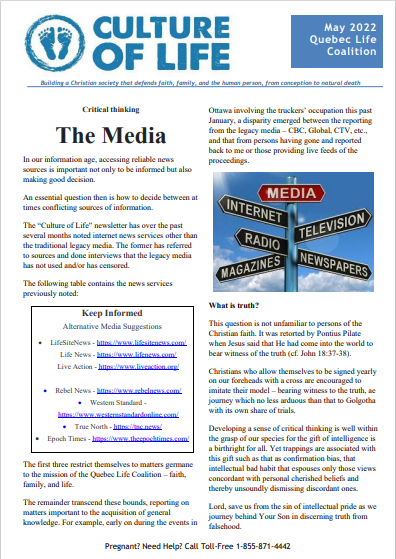