God has blessed us in countless ways.

In this Easter season, He has blessed us with the gift of His Son, whose incarnation, passion and death, and resurrection has restored us to communion with His Father, opening the doors to eternal life.

In particular, God has blessed me, and all of Quebec in general, with a man of faith, my employer – Mr. Georges Buscemi.

Before explaining, a small digression.

I first heard the above maxim not many years ago, though I suspect it has been around for some time, if not centuries.

Pithily, it represents the marching orders of the faithful, in the Roman Catholic tradition or otherwise. Excuse my pedanticizing, the motto defines the degrees of freedom which the people of God are to exercise; to pray … alone or in community, to pay … one’s tithe, and to obey … one's superiors, deacons, clergy, ordinary, the hierarchy in the church.

At least in the Roman Catholic tradition. The RC tradition is governed by a rule of conduct known as the Code of Canon Law.

According to the Catholic Encyclopedia, Canon Law is “the body of laws and regulations made by or adopted by ecclesiastical authority, for the government of the Christian organization and its members.”

That is to say, it represents the degrees of freedom which priests and we the lay faithful have in the exercise of our faith.

Incidentally the faithful are given an entire division within the code, ‘The Christian Faithful,” and it is here that Mr. Buscemi, faithful to our tradition, has acted courageously and faithfully.

Canon 212 states “According to the knowledge, competence, and prestige which they possess, they (the faithful) have the right and even at times the duty to manifest to the sacred pastors their opinion on matters which pertain to the good of the Church and to make their opinion known to the rest of the Christian faithful, without prejudice to the integrity of faith and morals, with reverence toward their pastors, and attentive to common advantage and the dignity of persons.”

There are other canons that touch upon Mr. Buscemi’s actions which are relevant but I limit myself in this letter to cited canon.

This past April 29, 2019, Mr. Buscemi along some twenty other signatories, including eminent theologian Fr. Adain Nichols OP, made public a letter addressed to the bishops of the Catholic Church accusing the Holy Father of the crime of heresy.

The matter did not go unnoticed as many shared reflections about this letter. All of these, the original letter in its 20-page argument as well as the replies, both favourable and not, are readily available on the internet and may be found with the serch words "delict of heresy".

Returning to Mr. Buscemi, it took faith and courage for him and the other signatories to call the Holy Father to order ... in his words, in what he has done and in what he has failed to do.

It is an act of filial duty that bodes well for his family, our organization, and Quebec, as virtue in matters of faith need to be manifested and not kept hidden and/or silent.

Congratulation, Georges, for identifying the root cause of our culture of death – i.e., the undermining of our tradition in matters of faith, family, and life. 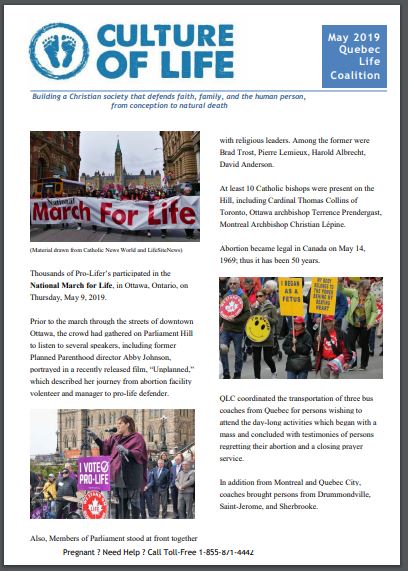