I’m writing to thank you for your participation in the 20th annual National March for Life this past Thursday, May 11, 2017 !

Yes, not all of you were aboard one of the two buses chartered to travel to Ottawa to participate in this day rich in prayer and political action.

Yet I believe that all of you participated in one way or another – by your physical presence, in prayer, and/or in your sacrifices, so that the most defenseless in our society, the unborn child, would have a chance for life.

O Canada! We Stand on Guard for … life.

Since our country's founding 150 years ago, Canada has defended for most of those years the life of the child growing in his/her mother's womb. Our very first prime minister, John A. MacDonald, referred to abortion as sapping the life blood of Canada.

Only in 1968, 100 years after the founding of our country, did abortion practices become legal and in 1988 the Supreme Court of Canada ruled that our abortion laws were unconstitutional thereby permitting abortions to be done at any moment during the entire gestational period.

Rallies in defense of the unborn child on Parliament Hill began immediately and ten years later The National March for Life was born. From a few thousand people it has grown to well over 20 000 these past four years. The Quebec Life Coalition (QLC) has been actively chartering Quebecers to Ottawa for the day since 2011.

This year we witnessed several firsts. For instance, there was a larger number of persons boarding at the Pointe-Claire location than in previous years.

Also, for the first time in the 20 year history of the march, a religious service was celebrated in Latin. Organized by QLC President Mr. Georges Buscemi, the community at St. Clement Church opened its doors and welcomed celebrant Fr. Demets, FSSP, who came from Quebec City for the occasion to preside the Tridentine service. About a quarter of the travelers from Montreal got off at St. Clement and joined twice as many parishioners of this lower town faith community. The remaining travelers were dropped off at either Notre-Dame Cathedral or at Ottawa's First Baptist Church.

Finally, after the mass, between twenty-five and thirty of the faithful gathered outside of St. Clement in order prayerfully process down old Saint Patrick road to Parliament Hill. We recited prayers and chanted hymns as we made our way through lower town and the By-Ward market. It took us about thirty minutes to reach the hill.

Thank you, one and all, for your support in making this day possible.

Looking forward to working with you in defense of life and bringing an end to abortion. 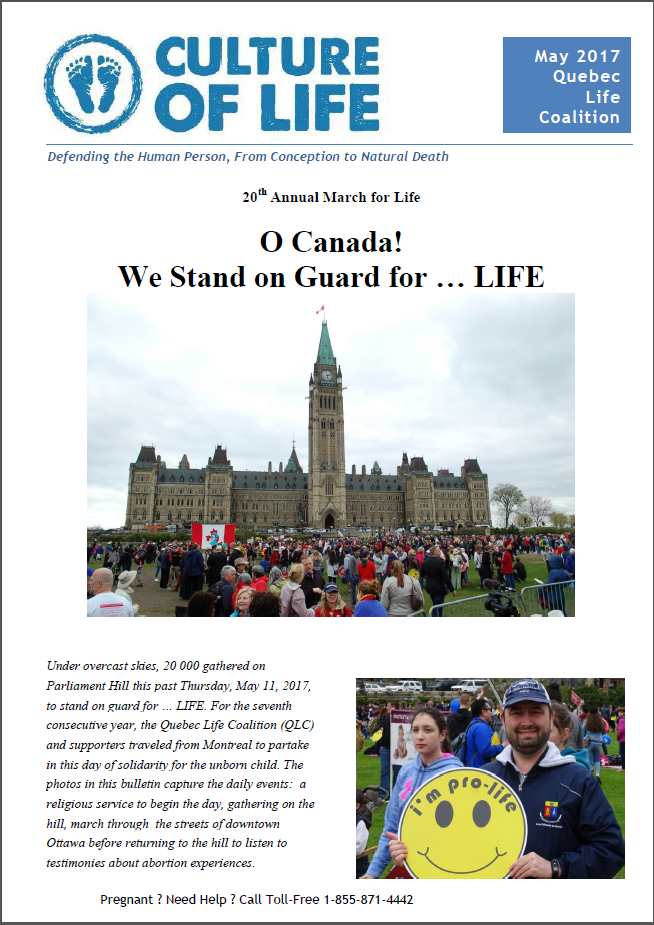 P.S.
Your support in prayer and in kind helps us pursue our motto of "Defending the Human Person, from Conception to Natural Death." Click here to make a financial gift.