Help us Help Women and their Babies

Our 40 Days for Life prayer vigil for the end of abortion took an unexpected turn this spring.

This our 13th vigil was all set to go when not one but two court injunctions forced its cancellation.

The first came a week prior to the start of the event on Ash Wednesday, February 18, when a bailiff visited our offices, serving a court document petitioning the Quebec Superior Court for an injunction. The injunction was against both me and the QLC.

The plaintiffs were two abortion facilities – the Morgentaler and Femina, along with the proprietors of the two buildings in which these separate businesses are located, buildings adjacent to each other.

The four plaintiffs were petitioning the court for a buffer zone the size of a square block preventing us from entering and thereby carrying on our work of peaceful prayer vigil and sidewalk counselling.

By sidewalk counseling I mean communicating and advising abortion-bound women and men about alternatives to ending the lives of their children, as well as the serious complications resulting from having an abortion.

The plaintiffs were requesting an immediate temporary injunction and secondly, sought to begin a process to establish a permanent injunction.

They justified their request on the basis of the harmful effect we were having on their welfare, and the welfare of their clients.

The second injunction occurred a week into the vigil. As we were prevented to hold the vigil outside the Morgentaler facility, we located another mill several blocks away on Saint-Hubert Street and moved the vigil there. Well, a week of peaceful prayer did not conclude before a second bailiff and a second court document, alleging similar charges as the first, was served at our offices.

The long and short of it is that due to time constraints in the court schedule, the judge would only be available to hear our arguments for both instances on June 16, 2015. In the interim, we ask you to keep us and our lawyer, Mr. Robert Reynolds, in your prayers. We are diligently preparing our arguments.

We believe that challenging these injunctions, however costly this might be, is important for the pro-life movement in Canada, particular for those seeking to stand outside abortion mills to lend their moral, spiritual, and material aid to women lacking support and feeling the need for an abortion.

Therefore, your financial help would be particularly appreciated at this time. Please give today. 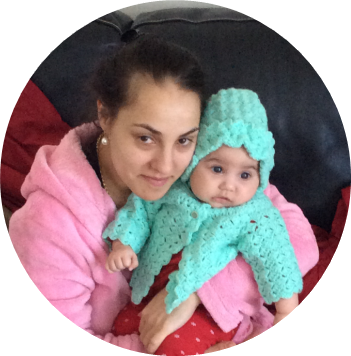 "Brian Jenkins and other representatives of Quebec Life Coalition have given me furniture, diapers, clothes, basically everything I needed both before and after the birth of my daughter Maria Monalissa."

"Today, I am very happy that QLC was there, across the street from the Morgentaler Clinic on that day in March 2014 where I was going to abort Monalissa. If I hadn’t met them, without a doubt I would have lost my child."

- Paula with her daughter Maria Monalissa

Thank you for your prayers and your financial help. In so doing, we are accomplishing something much greater than ourselves. 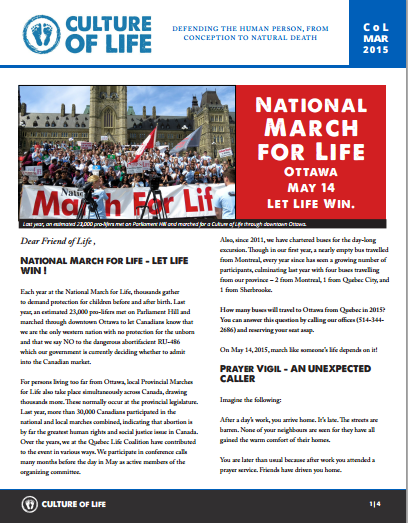