I wish to thank you for your continued support, both financial and prayerful. These permit us at the Quebec Life Coalition – QLC, to perform several fruit-bearing projects.

Some of these include:

As for the tangible results, I will mention three. First, in my last newsletter, I wrote about the work done by the member for parliament for Kitchener-Centre, Hon. Stephen Woodworth. His private member’s bill – a bill aimed at recognizing the humanity of the unborn, was debated for an hour in the House of Commons. A second debate on whether a committee should be struck to evaluate when a child becomes a human being will be held on June 7 (5:30 p.m.) with the vote on his motion on June 15 (evening).

(Please contact your MP, urging for their support for this motion.)

A second sign of our efforts was the pronouncement from a second member of parliament in support of the unborn. The Hon. Maurice Vellacott says abortion procedures are far worse than any schoolyard or neighbourhood bullying.

The subject of bullying has been a concern across the country. An extreme case arose this past spring when a young Quebec teen took her life following peer harassment in her school.

“It’s a good thing that people are openly discussing the harm caused by bullying, and considering strategies to address the problem,” says the conservative MP representing Saskatoon-Wanuskewin. “In light of this new awareness of bullying, consistency and credibility demands that we tackle the most cruel and most common bullying of all - the bullying, and ultimately killing, of babies in the womb.”

Mr. Vellacott notes a couple of ways by which abortions brutalize the young life before destroying it; the unborn recoils from instruments that penetrate the amniotic sac and scientific studies reveal that the fetus experiences pain as early as 20 weeks.

(He could have also mentioned how parents are encouraged to sing, talk, and play soft music to their unborn in the course of events leading up to delivery.)

He concluded by saying that “at a time when Canadians are demanding community and political action to bring an end to the bullying of our children, it is vital in these anti-bullying strategies to address the lethal bullying of the child in the womb.”

Judging from the turnout at this month’s National March for Life in Ottawa, Canadians in ever greater numbers are marching for life. This third fruit of the impact our work was the presence of about 20 000 people marching through the streets of our capital, represents a whopping 6000 more than at last year’s march! (For our part, we coordinated the displacement of fifty-three people from Montreal to Ottawa to attend the march.)

So, our collective efforts are producing fruits.

Yet, let us continue the good battle. Let’s continue our efforts and promote values that ensure justice for all, from conception until natural death. 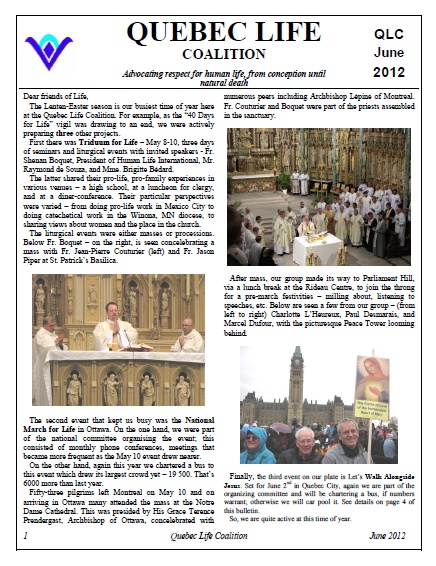