Savings Lives: From the Courthouse to the Phone Line

You may have heard that we were at the Montreal courthouse this past Tuesday, June 16, 2015.

Quebec Life Coalition President Mr. Georges Buscemi, our lawyer Me. Robert Reynolds, and I spent the day defending our position – we have the right to be on the sidewalk - the public right of way, so as to offer alternatives to women and men who are thinking of aborting their unborn child.

Three Montreal abortion facilities had petitioned the Quebec Superior Court this past spring for an injunction barring us from being outside their establishments.

It was quite a learning experience - listening to the proceedings, witnessing the application of the rule of law, testifying. By day’s end, I felt drained.

The presiding magistrate, Judge Chantal Lamarche, ended the day by ordering us to stay away from these abortion facilities until she submits a written judgment. She has six months, maximum, to render her decision.

There are several judicial outcomes. The June 16 proceedings were to determine whether a temporary injunction be set. A second trial shall be held to determine if a permanent injunction be applied. Following this second hearing, either party can appeal; and then after, if I am not mistaken, the Supreme Court, if it deigns to hear the case.

So much for the judicial process.

As you may have thought, our efforts to save lives upset many in our society. The very next day, an article regarding our day in court appeared in the Montreal French daily La Presse on its front page. It was sensational, disparaging and biased.

Consider its headline: Abortion Clinics Seek Protection. From the outset we are presented as a menace, one requiring protection.

This theme of needing “protection” runs through the twenty paragraph article, as the writer attempts to associate us with those who have acted violently in the name of saving life.

The first 3 paragraphs recount an incident involving a man entering the clinic hooded and making intimidating demands to the point where the employees felt the need to call the police. The writer then subtly links us to this intruder, both as menaces to the operation of this facility. One wonders how we who are praying outside on the pavement similar to this intruder !

Then the article misquotes QLC President Georges Buscemi. When asked to comment about the violence done against abortionists, Mr. Buscemi stated “I am against all violence against abortionists, as I am against the violence done to women during the abortion as well as violence against the unborn child.” Yet, the reported quote misinterpreted the second and left out the last of these three. Our society, including the media, is quick to delete any reference to life in the womb.

Finally, the article ends as it began, attempting to associate us with the violent. The journalist gives statistics on how abortionists and their facilities have been the object of some violence over the past 20 years. Hence, we who are praying on the sidewalk and offering alternatives to abortion are portrayed as being guilty by association. “Blessed are you when you are reviled and persecuted for my sake ...” 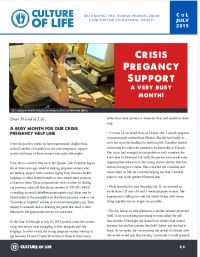