We’re on the cusp of summer. The signs are unmissable - warm temperatures, blooming lilacs, and life abounding abundantly. Has the harshness of winter been forgotten?

Though the harshness of winter may be forgotten, there is another harshness that cannot be – abortion.

On Saturday, May 27, 2017, several hundred people took part in the 3rd annual March for Humanity and Genocide Prevention, here in Montreal. Originally created in memory of the victims of the Armenian genocide of 1915, this march of solidarity also recalls the memory of other genocides and atrocities committed around the world.

To support our work, consider making a small gift through the monthly giving program. See bottom of page, reverse side.

Though a dictionary definition of genocide is “the deliberate and systematic destruction of a racial, political, or cultural group,” abortion is not dissimilar to genocide as it is both “deliberate and systematic”: 1. Our governments have instituted and have paid for it since the early 1970s and 2. Our governments have not legislated against it though given the freedom to do so by our Supreme Court in 1989.

There is another similarity. Though unborn children do not form a distinct “racial, political or cultural group” – even though girls as a sexual group are disproportionately aborted — unborn children do constitute a "group" as varying factors such as genetic defect, poor timing, etc. bring about their “destruction” resulting in upwards of 30 000 deaths per year in Québec.

Returning to Ms. Sheitoyan, she carried the pro-life message to several people on this day. First, a young woman spoke a “woman’s right to choose” and that “everybody in society accepts it.”

To this, Marie-Louise responded with a personal anecdote. The youngest of 16 kids, her brother may not have survived the fourth month of their mother’s pregnancy, as she was diagnosed with a fibroid and advised by her doctor to either abort or die. A woman of faith, she prayed and allowed nature to run its course and in time delivered a healthy boy with no harm to herself. Today, this boy is nearing retirement age and is the father of four children.

Marie-Louise also spoke with retired senator and General Roméo Dallaire. On sharing her view about the “first genocide,” the retired soldier and diplomat shrugged his shoulders, which she interpreted to mean “but what can we do.” Silence helps the aggressor, never the victim.

Finally, Marie-Louise’s attention was drawn to a well-dressed gentleman. She introduced herself and found out that he was the Armenian consul visiting from Ottawa for the event. She learned how ignorant he was of the Canadian landscape – unhindered abortion and this over the entire gestational period. She schooled him and encouraged him to promote the annual National March for Life.

Ending abortion begins with prayer. Prayer permits us to hear Our Lord speak to us in the silence of our hearts, on how to carry out His Divine plan, ending abortion in Québec.

For Ms. Sheitoyan, this meant sharing the pro-life message. For her mother, permitting the life budding inside of her to continue, trusting that God, the creator, will do what is best.

How do you and I discern God’s will for us in a province though rooted and steeped in religious faith yet mired in a culture of death, if not through prayer?

LEAD, kindly Light, amid the encircling gloom,
Lead thou me on!
The night is dark, and I am far from home, -
Lead thou me on!
Keep thou my feet; I do not ask to see
The distant scene, - one step enough for me...

Abandonning ourselves to God to become his instrument within His plan has moved us at the Quebec Life Coalition to implement different projects:

These are the fruits of our prayer, years of prayer, and the prayers of those who have preceded us.

You are welcome to join us on this path of ending abortion in Québec. In fact, we need you to join us. 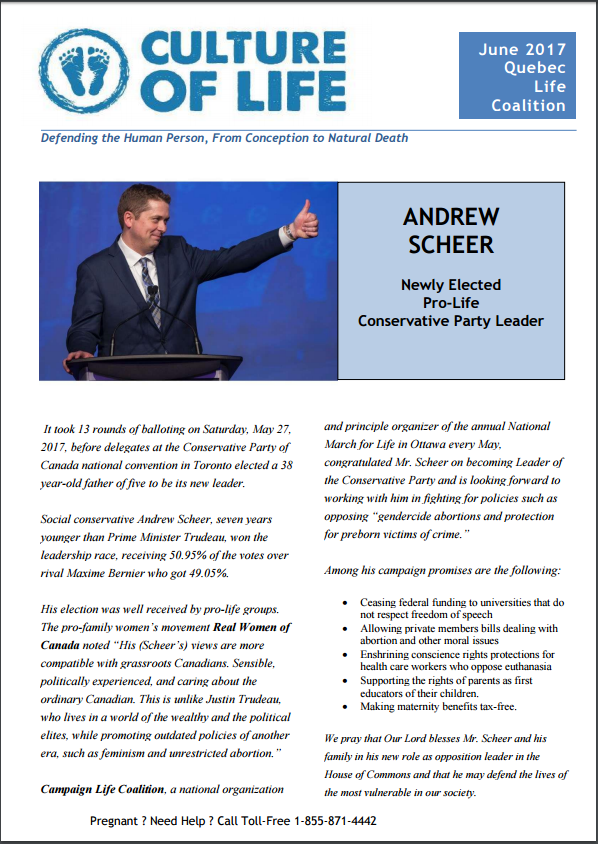