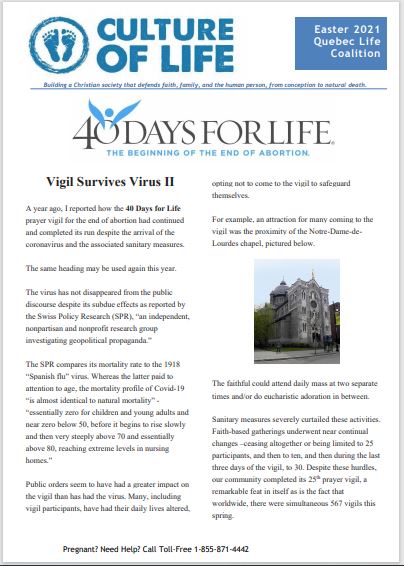 I wish you and your loved ones a most blessed Easter and Easter season.

I write to you on Maundy Thursday. Most of us have begun our final preparations for the Easter Triduum.

These may involve fasting, prayer, and almsgiving.

Each of these three activities was engaged in by the prayer volunteers who were present at the first of our twice-annual 40 Days for Life prayer vigil for the end of abortion. This intense 40-day demonstration for life which wrapped up on Palm Sunday was also a public show of prayer, fasting, and almsgiving on the streets of Montreal. It was held in sight of one abortion facility and near three others, the latter three all within a half kilometer radius of where we prayed.

We prayed, fasted, and gave alms at the intersection of Berri and St. Catherine Streets, one of the neediest areas in all of Montreal and the Metropolitan area.

In addition to the general commuter population, most of whom seem content to be silent spectators to the harmful drama of abortion occurring daily in their midst, this intersection draws a wide variety of people, many of whom are quite wounded in various ways. These include:

Furthermore, this spring I noticed new groups coming to this area. First a plethora of construction workers come daily in this area. Whether on university grounds or on the public utilities, they have seen the prayer volunteers daily congregate faithfully, rosaries in hand and prolife signs strung around their necks.

The prayer volunteers also did not go unnoticed by a second and even greater group of people – the homeless.

Though blessed with the presence of the homeless as many are pro-life and openly affirm our work, the prayer volunteers have witnessed countless distressing incidents of physical and verbal abuse as well as acts of vulgarity among their ranks. Police were frequently called to establish and sustain public order.

The prayer volunteers have furthermore been giving a listening ear to the tragic stories of many homeless individuals. These often include accounts of violent upbringings, broken families, and the coping mechanisms used to deal with their pain.

Our primary goal is the defence of the unborn innocent child, yet Our Lord seems to have called us to additional works of corporal and spiritual charity.

A third group present more noticeably to this area of Montreal are the men and women of all ages who have come to feed the hungry and clothe the needy. Single families, church groups and social media groups have been drawn to the intersection of Berri and St. Catherine Streets to serve meals, bring clothes, and in some cases share the Word of God.

The Quebec Life Coalition has made a humble contribution in this respect. In mid-March, we offered our office kitchen facilities to a homeless man of Indian origin with culinary skills, permitting him and two colleagues to prepare a meal that fed up 700 people, many of whom were homeless.

As we enter our final preparations for Our Lord’s passion and resurrection, we are aware of the Easter joy that awaits us: resurrection and life eternal. The great message of Easter is not only that death has been defeated, but also that life is renewed and affirmed – life in all its wonder, scope, and variation.

Through all of the trials individuals may face, and all of the degradations that our society has in many cases not only tolerated but embraced, the great potential of that life which derives from God to persevere, be renewed, break through barriers, and be enlivened by the Spirit remains constantly on display. This is central to the message of this most blessed season, as well as to all the work that we are engaged with as an organization, from advocating for the rights of the unborn child to responding to the diverse needs of all who cross our paths.

May we turn our attention not only to the victory of life eternal but also prepare for it during our earthly pilgrimage by caring for the vulnerable of our society, most particularly the unborn child.