We at the Quebec Life Coalition pray that God may grace you with the joy of newborn life and the hope that this entails throughout the year as well as in this season not only by the presence of Our Lord and Saviour but also among your immediate family and friends.

Over time we have learned not to overlook such graces as we have found that our present day society is hazardous to life.

And over the past year, we have been particularly blessed to foster life in varying ways:

All of these and more despite the fierce anti-life society we live in.

And what kind of anti-life society do we live in? Consider the events of the last week of November, 2016.

(I find it comical that the editor of LaPresse chose to use quotations marks around the word security. Was he acknowledging the irony of legislation aimed at controlling those few who gather to recite a rosary, chant hymns, or engage in thoughtful exchanges with whoever wishes to stop and chat?)

Regarding this latter exchange, the subject of our presence praying outside Ste-Justine Hospital came up. Regretably listeners were not told the reason why three of us, on two separate occasions, had showed up on the sidewalk outside this hospital whose sole purpose is supposedly the care of children: to protest the performance of late-term abortions at that facility as well as unclear fate that awaited infants born alive during some of these procedures.

This media bias all within a five day period show how the battle for life is fierce and how our Lord is using us at the Quebec Life Coalition to shake Quebec society of the effronts to life and the family that going on.

We thank you for your ongoing support of this vital work.

Working together, we will find joy and hope not only during this time of year but also for future generations. 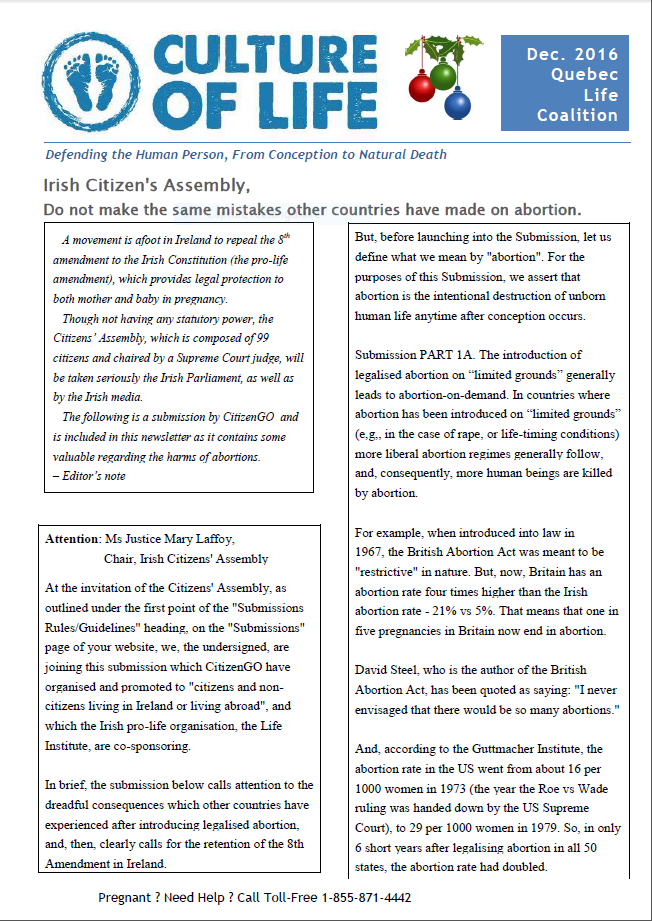