Impacting Montreal and Beyond

Blessed Easter greetings to you and your loved ones.

I have some exciting news. Your support of our work is impacting the Quebec legislative process! More about this below.

As we begin the Easter season, the Quebec Life Coalition has been preparing for this special time of year as we have been doing since 2009, bringing the message of life to the streets of Montreal.

Our 40-day prayer vigils for the end of abortion have defined us not only to Montrealers but also to all Quebecers, and its impact is felt throughout the province in several tangible ways.

First, the vigil draws people from not only the Montreal area but also province-wide. NDG, Laval, south shore Longueil, RDP, ville d’Anjou, and LaSalle, and further afoot, participants from as distant places as Ile Perrot, Granby, Ottawa, Quebec City, and even as far as Franquelin; you may need to Google this, have also come.

Second, the spiritual impact of our prayers also extends beyond the borders of Montreal. The weekend of March 5 & 6, our pregnant help service received an unprecedented 6 inquiries, one of which coming from our provincial capital.

A third way our prayers have had an impact is seen in the opposition we are getting. On February 23, 2016, Parti Quebecois MNA Carole Poirier, Hochelaga-Maisonneuve, deposited a private member’s bill aimed at establishing a buffer zone around the 47 abortion facilities in the province. She states that doing so will eliminate the problem of accessibility and security which now plague such centres.

What problem of accessibility and security?

Over the past 25 years, there has been NOT one incident of violence at a Quebec abortion facility.

Yet, Mme Poirier is of the opinion that our precious legislative process should be used to curb a non-existent problem.

Bill 595, or the anti-Brian bill as a friend of mine has called it, aims to restrict the work that we at the Quebec Life Coalition have been doing to help women and men.

Bill 595 will only exacerbate the harm done to women and men on a daily basis by eliminating an important source of truth – the services we at the Quebec Life Coalition are offering.

So, please contact Minister Lise Thériault, the minister responsible for the Status of Women, to ask her to oppose bill 595. Her contact information is as follows:

So, let us not remain silent in denouncing this grave injustice to members of our society and the misuse of public time and funds.

P.S. The National March for Life is set for Thursday, May 12, and as in years past we will be chartering buses for many to attend. Please consider joining us or else supporting this project with a generous gift so as to have your voice and others heard by our elected officials in Ottawa. 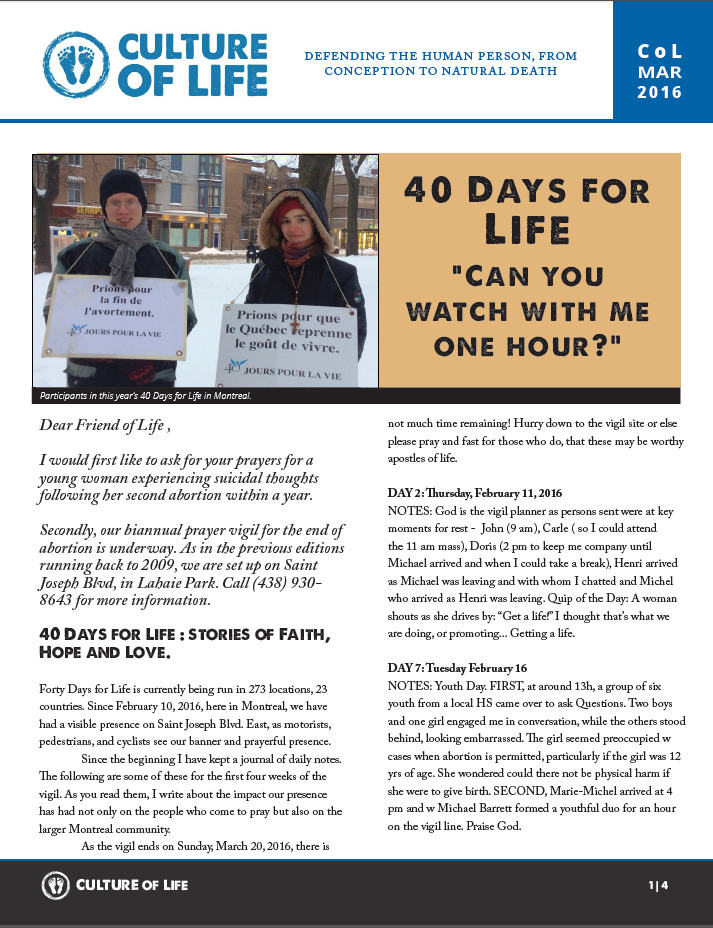