Horror! Mom Kills Son in Womb to Spare Him Any Pain

I came across the following post earlier in the day from the site entitled "The Creative Minority Report". I reproduce it below.  I include it because I find it a well articulated and sensitive presentation of a grave topic in our society - the unjust fate of un-borns children having some form of imperfection, such as trisomic 21 - i.e., Down's syndrome,  or spina bifida. Regarding the former, I have read that 90% to 95% are aborted. The article concerns the latter condition.

What is striking about this article, and this eerily echoes what I have heard both by to the girls heading into abortion facilities and by the facility's workers, is the prescient knowledge of the fate of the unborn. There is the presumption that the life of the unborn will be one of misery. Little weight is attributed to unknown possibilities of life. The followingis the article in its entirety. - Brian J.

Chelsea Zimmerman is guest posting here once a week for the next few weeks. We're glad to have her. She typically writes at Reflections of a Paralytic - which is a great blog that you should bookmark or follow or favorite or whatever it is you do to. Just read her. Here she is: 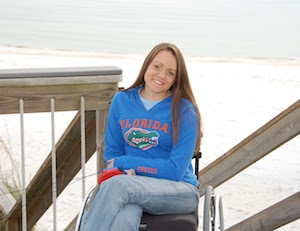 After the accident that left me paralyzed from the chest down, my first roommate in rehab was a young woman with spina bifida, a birth defect that involves the incomplete development of the spinal cord or its coverings, usually leaving the individual unable to walk unaided. She was the happiest, most full of life girl I’ve ever met and her love for life influenced me greatly, helping me more easily adjust to life with a major disability.

I’ve lost touch with her over the years, but she and her infectious laughter were clear in my mind as I read with great sadness this column by “Sara Carpenter” (a pseudonym) in the UK Daily Mail about the decision she made to kill her unborn child after it was determined that he would be born with spina bifida. It’s not that it was news to me that children pre-natally diagnosed with various diseases and disabilities are killed in untero. But the description she gave of how she pictured her son’s life with a disability cut me to the core:

"I pictured him watching from the sofa, frustrated and immobile, as his sisters turned cartwheels and somersaults in the living room. I envisaged trips to the park, where he would sit on the sidelines as other children clambered over climbing frames and kicked footballs. … “I tried to shake away the image I conjured in my head of a little boy, lonely and friendless, robbed of the most basic human functions. The prospect of watching a child I’d love just as much as his sisters suffer in this way made me howl. I hugged my stomach, as if I could in some way shield him from the misery that lay ahead.”

What is even more upsetting about her account is that Sara and her husband both acknowledged that they were in fact killing their son – not vaguely “terminating a pregnancy.” They named him, held him after he was delivered via induced labor abortion and gave him a proper burial. Sara even talks about the abortion being, “completely at odds with my instincts as a mother.” And yet she did it and she justified it because she thought she was sparing him the awful life she was so sure he would have.

But why was she so sure of this? Who says that disabled children have such miserable lives? Certainly not the children themselves! In fact, researchers at Newcastle University recently applied standard self-assessment techniques used to appraise children’s levels of happiness to 500 young people with cerebral palsy. The results demonstrated that “Disabled children in the North of England have the same range of happiness and unhappiness as all children.” As they grow up and develop their sense of self, “they see their disabilities as part as who they are…(and) they perceived their position in life no differently as their friends in the general population.” The same can be said of children with other disabilities, including spina bifida. I dare anyone to listen to this laugh and tell me that that child is not happy to be alive.

So what is the problem?

The problem is that by and large non-disabled people simply disagree with this. They instinctively judge the lives of these children through able-bodied eyes and only see tragedy. Going back to the Newcastle study, even many parents who have chosen to love and care for their disabled child scored their children’s quality of life much lower than the children themselves. And, so many, many parents like the Carpenters conclude that the only loving thing to do is end their handicapped child’s life in the womb and spare them the suffering.

I have no doubt that the decision to abort is every bit as agonizing as Carpenter describes in her piece. However the parents and those advising them in these cases are confusing love with pity which often stems from a kind of selfish empathy. One sees a child in a wheelchair and thinks that he would rather be dead than have to live in such a situation himself, so he decides that it is much more merciful to never allow a child like that to be born. These people are so blinded by fear of the “otherness” of such conditions that they cannot see what is still good and beautiful. What’s more, in many ways, they are trying to save themselves from the emotional stress of having to care for someone suffering so terribly as much as they are trying to save the child from his own suffering, if not more so.

Everyone has the right to pursue happiness, including children with disabilities, and the reality is that most of them will enjoy their lives immensely…if they’re given the opportunity. Sure, sick and disabled people must endure sometimes tragic suffering, but the value and meaning of our lives are no way diminished by some physical limitations. Even in the midst of the pain and adversity that come with disease and disability, there is still quite a lot to enjoy about life. You just have to be willing to see it.