Would you consider voting for me in the next federal election?

This past month I was privileged to meet with the leader of the Christian Heritage Party of Canada (CHP), Mr. Rod Taylor. Travelling from Ottawa to the Maritimes, he stopped off in Montreal and we spoke for several hours discussing among other things the possibility of me running under the CHP banner in the forthcoming federal election, set for October 19, 2015.

Is running as a candidate in a federal election relevant to the work that we at the Quebec Life Coalition are doing – i.e., fostering respect for life from conception to a natural death?

I think so, as your support permits the QLC to battle the culture of death in four ways.

First, there is prayer. Through our conscious contact with God in prayer we try to discern His will to bring about a civilization of love, slaying the dragon that is abortion along with its partners.

The QLC is also involved in education. Compiling newsworthy stories on our website, organizing yearly congresses, making public presentations, supporting youth and young adults with their projects are all examples of educational initiatives we are involved with.

Helping Women. For over three years, we are working to make abortion unthinkable with services such as a toll-free help phone line and a post-abortion ministry.

Finally the fourth way we confront the culture of death is politically. We collaborate in planning the yearly National March for Life in Ottawa. Also, you are not unfamiliar with the petition campaigns we have organized against abortion funding, the Quebec euthanasia legislation, and the Supreme Court of Canada ruling on assisted suicide.

Further, regarding the Quebec legislation, we ran a candidate during the 2011 provincial election as a means to inform the electorate not remain silent as the four main political parties were about this issue.

As 2015 is another election year, no federal party, except for the CHP, has a pro-life platform.

As we at the Quebec Life Coalition work to promote the respect for life, the political process is an important tool for championing the plight of the unborn.

WHY NOT THE CONSERVATIVE PARTY OF CANADA?

First, the CHP is the only pro-life party in Canada.

The Conservative Party of Canada of Mr. Harper, safe for a few backbenchers, has not dealt with the daily slaughter of our most vulnerable Canadians. Canada is the only democratic nation in the world without any law protecting unborn children for the full nine-month term. Incidentally, last month, I received a phone call from a woman in France six-months pregnant who wanted to travel to Canada to abort her child as French forbids abortion after 22-weeks.

So I ask: would you consider voting for me in the forthcoming federal election in order that the unborn, and the other vulnerable members of our society, have a voice in Parliament?

As always, we thank you for your support, in both prayer and in kind, as we plan to run and / or support candidates in the forthcoming election.

May our Lord bless you and your loved ones. 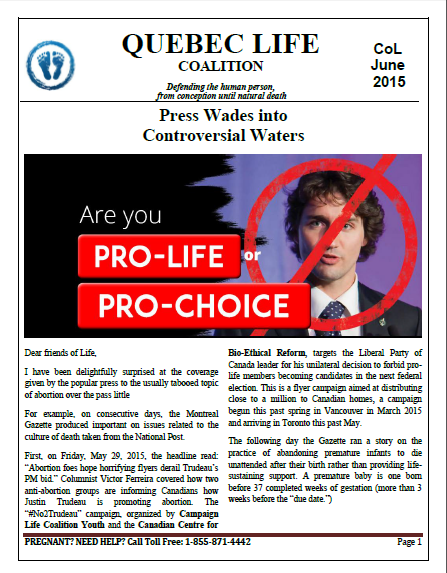