This past Wednesday, September 27, we began our twice annual 40 day prayer vigil for the end of abortion and God was with us.

First, the prayer vigil runs through to Sunday, November 5 and like the springtime vigil, we are at two locations. Weekdays, we may be found near the intersection of Berri and St-Catherine streets, the hub of the abortion industry in Montreal and the province, with no fewer than five abortion facilities in the area. And weekends we are in the more tranquil location of Lahaie Park, across the street from former location of the Morgentaler facility where upwards of 60 000 unborn children died during its 20+ years of operation.

Within the first week of the vigil two remarkable stories emerged.

One came in the form of a letter to the editor.

A commuter irate with our peaceful prayerful presence on her daily commute wrote a shaming letter which a Montreal daily published.

I won’t dwell on the contents of the letter, leaving the interest reader to peruse this letter on their own.

Rather, I wish to note the responses which the letter garnered. Remarkably, seven of the ten respondents took issue with the letter writer.

For example, one respondent wrote: “The people of UQAM, this ‘high place of knowledge and militancy’ do not like freedom of expression. It seems intolerable that such a message (the prayer vigil) is addressed, the author says. …. I find it intolerable to read her text in the morning! How does she dare to think otherwise than I do?"

More remarkable than this unusual show of support occurred on the very first day of the vigil.

A friend called me to say that a pregnant woman whom she and I had been accompanying had decided to cancel the appointment scheduled for the next day with the abortionist. (On Day 22, I received confirmation that the pregnancy was continuing and how the mother was overjoyed with her decision.) 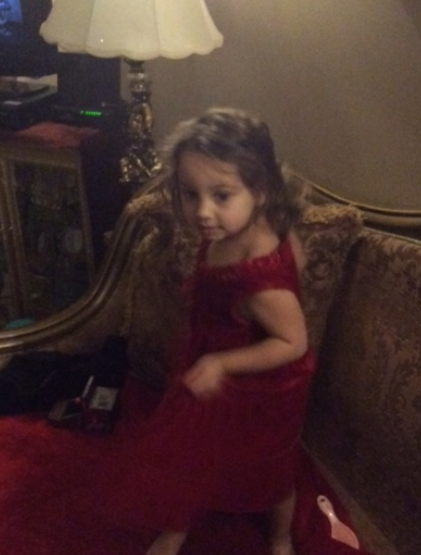 Opposite is a three-year who also was spared the deadly fate of abortion.

On October 17, 2017, I attended her birthday party with family and friends.

At the spring 2014 vigil, her mother arrived at the abortion facility and on seeing a friend and me came over to speak. The ensuing conversation helped her decide to cancel her appointment and the result is obvious – a joy filled youngster who enjoys dancing!

We are into the second half of the forty day prayer for the end of abortion. In solidarity with those of us on the streets, you can easily participate.

Consider joining us, weekdays at the corner of St-Catherine and Berri streets and weekends at Lahaie Park - 30 St. Joseph Blvd. east. Both days we will be present from 8 a.m. to 5 p.m.

Consider joining us wherever you may be. Jesus frequently made time to connect with His Heavenly Father. You can do the same. At home, in an adoration chapel, or wherever the spirit leads you, Our heavenly Father is ever ready to sit down with you.

Thank you for your on-going support for building a culture of life.

P.S. Have you considered becoming a monthly donor? A steady source of revenue, however small, represents an important affirmation for the work that we do. 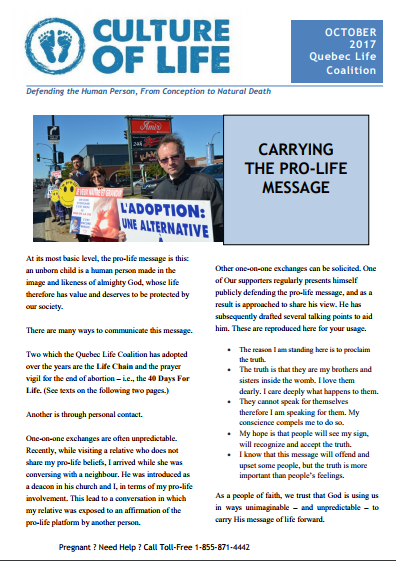