This past Sunday I was warmly welcomed by Cornwall's pro-life community as I travelled there to take part in their annual March fo Life and Annual General Meeting.

Under sunny skies, the afternoon began when Gale Barr, head of Pro-Life Cornwall Pro-Vie, gathered the thirty or so of us in prayer before the entrance of the Charles-Émile Claude Centre before leading us thrugh the streets of Cornwall. At the head of the march, she was accompanied by her husband as well as a fourth degree Knight of Columbus. 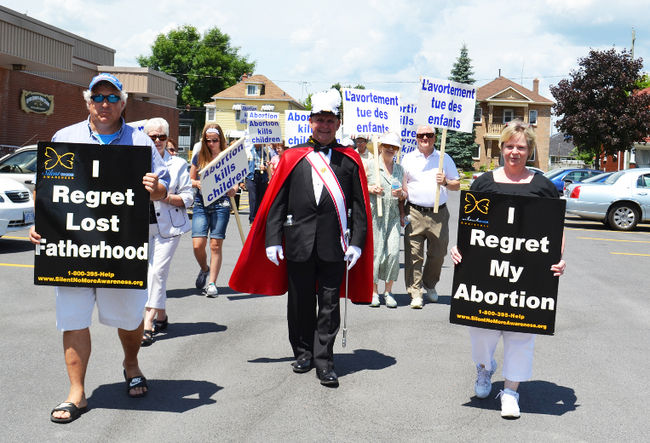 Walking in pairs, we followed behind. Deacon Christopher Chisholm introduced himself to me and accompanied me for the forty-minute, 1.6 km walk.

Back at the recreation centre, the AGM was presided by Ms. Barr. In addition to reports by the secretary and financial officer and the election of new board members, there was a surprise addition to the agenda - me!

Ms. Joan Lemieux, office manager for Pro-Life Cornwall, invited me to say a few words about our work here in Quebec. With delight, I accepted and after briefly outlining the history of QLC, I spoke about a few of our current projects - such as outreach into the community, 40 Days for Life prayer vigils, and sidewalk counselling.

The meeting ended with a presentation by Ms. Anastasia Bowles, Special Projects Coordinator wiith Life Canada. I gathered from her thirty-minute power-point presentation that Life Canada produces national campaigns promoting adoption. Venues in which their adds run include buses, bus shelters, and in the general media.

By 4 p.m. the meeting had ended and I was making my way back to Montreal.

A story appears in the local paper - The Cornwall Standard Freeholder.

P.S.  The AGM began with the following prayer:

Prayer for the Unborn

Heavenly Father, in Your love for us, protect against the wickedness of the devil, those helpless little ones to whom You have given the gift of life.

Touch with pity the hearts of those women pregnant in our world today who are not thinking of motherhood.

Help them to see that the child they carry is made in Your image - as well as theirs - made for eternal life.

Dispel their fear and selfishness and give them true womanly hearts to love their babies and give them birth and all the needed care that a mother can give.

We ask this through Jesus Christ, your Son, Our Lord, Who lives and reigns with You and the Holy Spirit, One God, forever and ever. Amen.