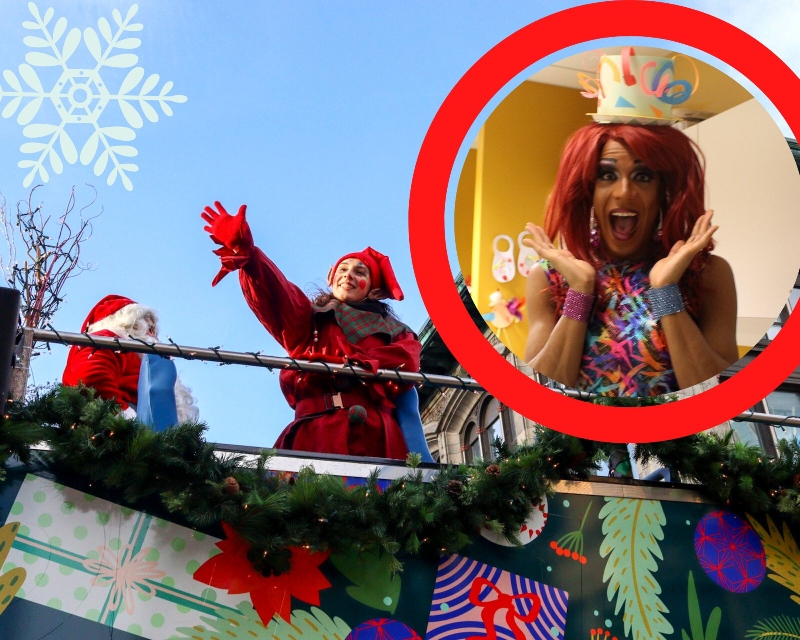 A transvestite will be present as the ''Star Fairy'' at this year's Montreal Santa Claus Parade.

After two years of cancellation due to the pandemic, Barbada, a transvestite, will be present at the Santa Claus Parade on St-Catherine Street in the Quartier des spectacles, on November 19th, starting at 11 am. The event is organized by Montréal Centre-Ville, a non-profit organization with nearly 5,000 member businesses.

This year marks the 70th edition of the Santa Claus Parade, but it is the first time that a transvestite will participate in it. According to the Montreal Downtown website, this is an annual tradition for more than 400,000 spectators, and the event will also be aired on the TVA network on Sunday, November 20th at 4 p.m. According to organizers, this is the largest holiday event in Quebec.

"The Santa Claus Parade is a great family tradition that has been going on for 70 years in downtown Montreal. It inaugurates the winter season, which we hope will be just as exceptional as the summer we just had. Whether it's to welcome Santa Claus, spend a holiday with family, gather with colleagues or start holiday shopping, downtown is still the place to be for all Quebecers," said Glenn Castanheira, Executive Director of Montréal Centre-Ville.

Since the announcement of drag queen Barbada's participation in the Montreal Santa Claus parade on November 19th downtown, the outrage was evident on social networks and is spreading, according to Frédérique de Simone of the Journal de Montréal.

However, this resistance only motivates him more: "People have the right to comment on social networks, it's part of the freedom we have, but I tell you one thing, the more these people speak out against it, the more people talk about it, and the more it's going to encourage organizers to pursue the "booking" of drags at events like these," says Barbada in an interview with the QMI Agency.

According to Montreal Blog, organizers have no intention of canceling Barbada of Barbades' participation in the Montreal Santa Claus Parade. "This parade represents the diversity and inclusiveness of Montreal. For us, it is very important that the event reflects this image," Emmanuelle Allaire, director of communications for Montreal Downtown, told MTL Blog.

Even Denise Bombardier, whose pro-abortion and anti-family positions are widely known (the latter were highlighted in previous QLC articles on Mrs. Bombardier's comments) shares a more traditional opinion in the Journal de Montréal.

It remains to be seen whether parents and other concerned citizens agree on the "opening" of Montreal Downtown to drag queens.

"I can't take it anymore. Who is asking for a drag queen to interfere with the imagination of children? Then you wonder why more and more people are being tempted to the safe, if not extreme, right. I should block my nose and vote conservative too. Because if we don't do something, it won't stop. Parents should boycott this propagandistic parade of woke thinking. What's the point of voting for a man who dresses up like a female caricature." - Pierre Lavoie

"Only at the moment when ordinary people start to boycott woke events, maybe the organizers will get the message." - Denis Gauvin

"I can't believe that people would allow this, there are limits to accepting and respecting diversity, why would you want to show off to children so much? What is the real purpose of this? A drag queen simply has no place in schools, nor with Santa Claus!" - Nathalie Brière

"For us, it's settled! The little children, and the slightly older ones, will not attend this masquerade! We will go elsewhere, the children do not have to undergo the bullshit of the mixed spirits! For the little ones, a Madam is a Madam and a Mister is a Mister! They will be confused soon enough, let them be children. Little girls and little boys!" - Lyne Dumontier

Denise Bombardier also shares the following in her interview with Richard Martineau on QUB Radio: "We're talking about the parade after the pandemic, don't forget that the pandemic lasted two and a half years, there will be little children in the street to watch the parade or on television [...] little children who weren't born two years ago and who will see this kind of caricature, it's unbelievable. In fact, I believe that on a deeper level, these are adults who want to impose their sexual fantasies on little children and little children must be protected from that [...]"

Finally, Gilbert Thibodeau, former mayoral candidate for the Action Montreal party, shared the following on Twitter: "There will be no Star Fairy. A "Drag Queen" will accompany Santa in the parade. I was hoping that Montreal had reached the bottom of the barrel. Well no, it seems that the degradation of Montreal's reputation is not over yet.

"[...] what surprises me, to say the least, is that the 2022 star fairy will not be what I remember from the 70-year history of this parade: This year, with the approval of the elected officials at City Hall, it will be a "Drag Queen" who bears the name of Barbada.

Come on, I’m fed up. Let’s hope that, to add to the ridiculousness of the parade, Santa won't feel a twinge of discomfort and announce that he’s pregnant. In closing, I try to remain polite, I say that this is idiotic, totally idiotic, 'extremely' idiotic."

Petition: No to a Drag Queen at the Montreal Santa Claus Parade

« Thank you for your ministry. My prayer is that it grows in the name of Jesus. It's beautiful to see people stand up for Life ! » --Émilie
Give to Quebec Life Coalition
Montreal Quebec drag queen LGBT