As the 40 Days for Life Prayer vigil was approaching its end, we received an urgent request. One of the vigilers asked for prayers for a young woman who was being pressured to abort. Seemingly, this young woman's parents and boy-friend were insisting that she end the life of her unborn child. Deeply troubled, she confided to a work mate.

Being on the mailing list of the Elliot Institude, I eerily experienced first-hand what I had frequently read from this post-abortion service. Its web site is aptly identified: http://afterabortion.org

The Elliot Institute actively documents cases of forced abortions. Since 1988, it has compiled an impressive bibliography of original research. Further, it has used these studies to educate and advocate for women, men, children and families hurt by abortion. For example, a sample of its peer-reviewed research includes articles, leaflets, and books such as:

These and other of their researching findings make their way into their education work via flyers and fact-sheets.  One flyer set for mother's day reads: 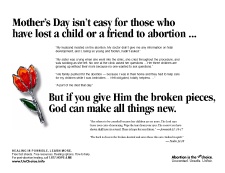 whereas a fact-sheet includes the following statistics:

The Elliot Institute also notes that too often coercion can escalate to violence.  A recent posting of theirs bears this out - "Ohio Man Pleads guilty to Attempting to Force Girlfriend into Abortion Clinic at Gunpoint."  Recent incidents in Newfoundland and in western Canada have shown such that such violence also occurs here in Canada. 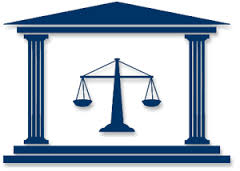 Their advocacy has included participation in the ad hoc Committee of Women Pregnant Through Sexual Assault and in the drafting of laws targeting women coerced, forced, or pressured into abortion by those around them.

In sum, the Elliot Institute is a valuable on-line resource for all persons involved in the pro-life cause.

Returning to the young lady to whom I alluded to earlier, I commend her to your prayers.  Though I'm told she has fortunately not gone through with an abortion, yet, as the Elliot Institute has shown, the mother's womb is not safe place for the unborn at any time during its time there.