Blessed Easter season to you. 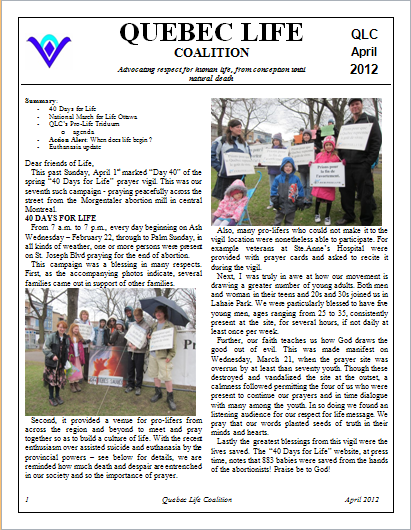 Our Lord has risen. From the tomb come our birth, our light, our forgiveness, our hope, our joy, and our life. (Click here to access the April newsletter.)

Praise be to Our Lord and Saviour, Jesus Christ!

The victory is ours…

… yet there are battles that remain.

One such battle is tormenting our fellow citizens. It is the lost of hope and the signs are many.

Abortions continue. Many have turned their back on life and relationships; these are viewed as disposable, replaceable. And in so doing, they are scarred in the process – scarred psychologically, physically, and spiritually. Over 30 000 per year rends havoc in the women themselves and in then in those around her. I recently read that ten people are affected with each abortion.

Suicide is real yet seldom reported.

And assisted suicide and euthanasia has gained greater advocacy. The recently released report from the Death with Dignity Committee included a most worrisome recommendation - that the Quebec Government not prosecute physicians who help terminally ill patients to die.

So, the value of life has been lost to many of our fellow Quebeckers.

(It makes one wonder what has become of the once-familiar motto – "Joie de Vivre.")

Elsewhere in our society we are witnessing an indignant student movement, perturbed by legislation that will impact not only the level of their indebtedness upon finishing school but also, and more fundamentally, whether they will be able to go on with their studies.

Quebecers are also confronted with how their provincial government does business, particularly in the construction industry. The Charbonneau Commission is investigating how contracts are awarded and we have already seen arrests being made.

Yet, to many of us in the pro-life movement what concerns is the dearth of any religious reflection in these and other matters. We see a climate that has ignored and, more strongly, scorned and vilified appeal to divine assistance.

For example, during the just concluded "40 Days for Life" prayer vigil, I witnessed numerous instances of abusive behaviour directed towards me and many with whom I prayed. Also, I was told of similar occurrences during my absences. Yes, the notion of restrictions is a cause of this aggression but also the fact that we are, heavens forbid, are praying perturbed many of our fellow citizens. The implication by many is that prayer is outdated and belongs to a former era.

Yet the same vigil witnessed the participation of over 250 centres of prayer from around the world - including nine others in Canada, resulting in over 880 children saved from the scourge of abortion.

We at the Quebec Life Coalition, with your support, are ever present in this battle to promote hope.

So, whether setting out on our own or in collaboration with other groups in Quebec, the rest of Canada, and in the United States, we hope to sprinkle seeds of hope within Quebec.

Thank you for your continued support.