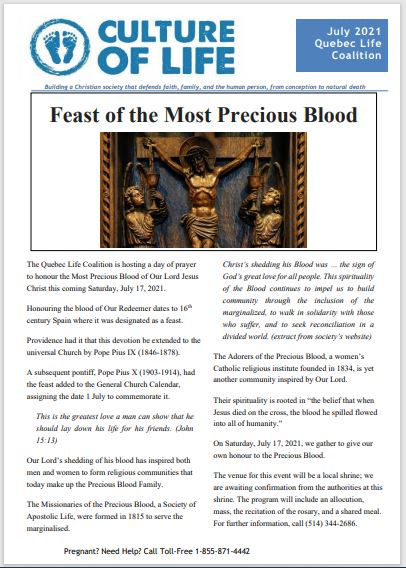 We live in a country where 100,000 times a year a woman carrying an unborn child hires the services of a “doctor” to murder the tiny life growing inside of her.

The Hippocratic maxim of “Do no harm” is ignored as into the mother's womb introduced are a curette (spoon with a sharp edge) and a suction rod, to tear apart and remove the body of one whose existence has become troublesome. The child's bloody remains are then placed in a bin labeled "biological waste" and trucked to an incinerator.

Even more gruesome is the case of a late-term abortion, when the unborn child has "added value.” Pharmaceutical companies and research universities offer a premium for the child’s organs. The little warm body, removed from his mother by caesarian section, is brought into a specialized dissection room where a technician will remove the organs of choice. It is not unlikely that this child will be alive during the extraction of his parts, because the organs from a cadaver are useless. This was very possibly the case for the poor child, killed by a late-term abortion in the 1970s and whose kidneys were used to create the HEK-293 cell line that was used in the production of a remedy for SARS-Cov-19 virus.

O Canada, you have strayed. Would our fore parents recognize you today? Killing unborn babies, whose remains are sometimes used by pharmaceutical companies to concoct medicinal products or cosmetics. O Canada, what have become of your practices. May we be more cautious before calling other nations backward or uncivilised? Woe Canada!

Our country mocks God, including when it comes to issues of life. The voice of He who said: "This is my body, given up for you" is drown out by the murderer who shouts: "This is your body, delivered for me!” Christ gives his life for others, so that they may have life and that more abundantly. The abortionist takes the lives of innocent children and leaves in the hearts of mothers and fathers a void that no one can fill, except God himself.

July 1, Canada Day, should be a day of mourning. How can we celebrate? How can we even dare to smile in this bloodstained country, when such abominations not only take place on average 274 times a day in so-called "clinics" not far from home, but especially when these murders are considered by our leaders as a “right” and as a sign of progress?

Faced with such a situation, Canadiens have a duty not to celebrate but to enter, if it has not already been done, into a resolute and sober resistance against the Canadian regime, which has usurped the beautiful name of "Canada" and forever tarnished its memory.

This resistance will need to be multifaceted and varied, according to the abilities of each. At the root of any consistent and effective resistance will be first a love for truth and the hatred of lies. We will also need to assert our faith in this humble and compassionate God, who raises the lowly and casts down the mighty. Our struggle is not that of a day or even a decade. Killed in a climate of widespread indifference, each of these 100,000 children has a name and a destiny willed by Almighty God. Imagine the measure of Divine justice that awaits those who will not have resisted this murderous abortion regime! And here I am not referring to the collaborators and abortionists who, if they do not repent, will have to live eternally the torments which they have inflicted during their lifetime, on countless children.

The Quebec Life Coalition would like to thank all those who have been resisting. Your prayers, your deeds, and your support says "no" to the lying and the murdering. You have not turned a blind eye to the innocent lives. Because of you, their lives will not go unforgotten by such impersonal and cruel ways. By associating here on earth with God’s little ones, you will be great in the Kingdom of God.

p.s. Your financial support of the Quebec Life Coalition helps us to continue promoting life from conception to a natural death within our faith tradition. You may either mail your gift in or give online by clicking here.