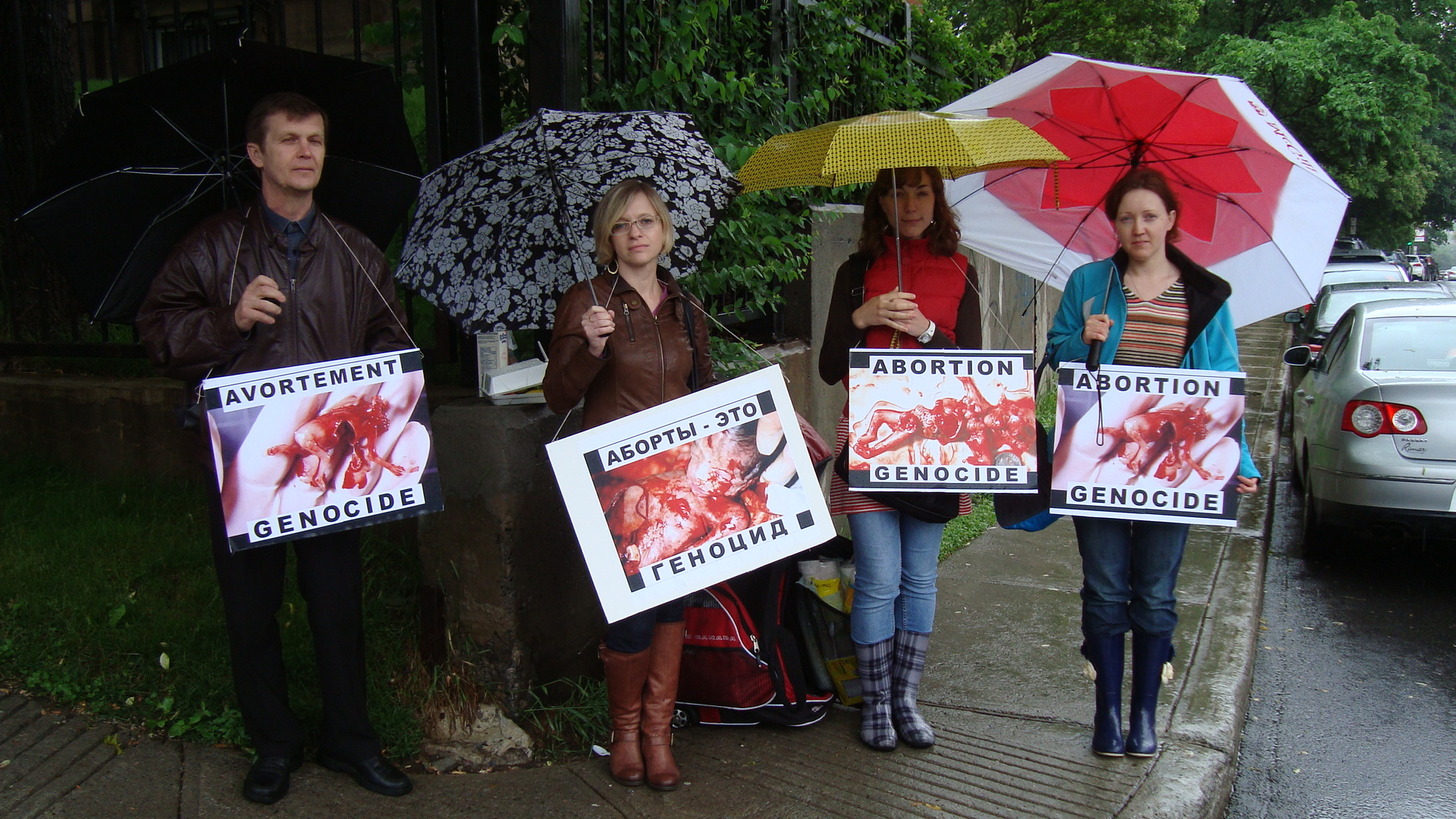 Last Saturday June 2nd at 1pm there was a pro-life gathering in front of the Russian Consulate (3685 Avenue de Musée) in Montreal in support of the “Warriors of Life” campaign to end abortion.

The "Warriors of Life" is an international anti-abortion movement whose campaign aims to prohibit abortions in Russia, Ukraine, USA, Poland, and Canada.

On June 1st 2012, the “Warriors of Life” picketed in front of the United Nations Headquarters in New-York. The same day (June 1st) the Center for Bioethical Reform organized a picket in front of the Russian Embassy in Washington, DC to support the letter that the “Warriors of Life” wrote to Vladimir Putin "requesting an Institutional Court investigation into the legality of abortion-permitting clauses. According to the legal analysis done by 'Warriors of Life', these clauses are unconstitutional."

Due to the poor weather conditions, the gathering in Montreal in front of the Russian Consulate was not as large as I expected. We were a group of five people. The organizer brought several images of aborted children with slogans in French, English, and Russian stating “Abortion – Genocide.” Together, we wore those images around our necks and stood in the rain facing the oncoming traffic.

This was the first time that I held signs with photos of aborted children in front of the public. I have spoken to several people about the use of graphic images, and, needless to say, the opinions are diverging (even within the pro-life field).

On the one hand, some claim the images are shocking, violent, and disrespectful both to the public and to the babies whose bodies are being displayed.

However, one must consider the fruits of such an act to decide whether it is worth it or not. Does displaying abortion imagery reveal the truth to those who are “pro-choice”? Are photos an unparalleled way to convey the horrors of abortion? Can lives be saved by doing this?

I think the answer to all these questions are yes, yes, and yes again. Every day in the news we are shown shocking photos of dead civilians, starving children, diseased people, road accidents, and other brutal acts. Advertising campaigns against smoking display awful images to warn people against the dangers of cigarettes. Museums in memory of the Holocaust show photos of its victims in order to inform people of the extreme violence that was done against humanity.

These photos impact us at an emotional level that cannot be attained through words alone. When one talks about the dismemberment of fetal body parts, does it compare in the least to the photographs we see of an aborted child? Upon recognizing the arms, legs, organs, and face of that little child, everyone is faced with the reality of abortion just as it is (no Photoshop used here!) I invite you to read these two articles in defense of the use of graphic images:

2) "The use of graphic images: Re-thinking pro-life strategy” by Priests for Life

The second article also includes a list of historical examples of the use of graphic images in other social reform movements. I hope the people that turned and saw our abortion signs on Saturday remain shocked by our images. In the same way, I believe all pro-lifers should be shocked time and time again that such atrocities continue to exist (and are even encouraged) in our society. Sometimes I forget that the work we do involves a constant defense against the murder of innocent infants- seeing the bodies of these little children reminds me that the work is not over and that we cannot be idle while these crimes continue to occur on a daily basis.