Monday, October-08, Day 13 of the prayer vigil for the end of abortion had a little bit of everything: the reunion of old friends… the surprise arrival of others… the generosity of one.,, and a couple of close calls.

Ymelda and Marlene live on the furthest eastern point of the island of Montreal. Using public transit it is a long hike to travel into the city, let alone getting to the vigil location. I, on the other hand, live in the north end and rarely, if ever, cross paths with either. And so the 40 Days for Life prayer vigil is an opportunity for old acquaintances to be renewed. Such was the case today and Ymelda accompanied by her other sister, Muriella, came by the vigil location for an hour of prayer.

Also, today is Thanksgiving Day Monday and two blessings came our way while at the vigil location. First, there was the unexpected visit of some of our regular prayers. Michel and his wife Lise often come on Tuesdays and Thursdays and so their arrival today was an unexpected Thanksgiving treat for Francois and I. They stayed an hour and half to pray.

The second came in the package of a Thanksgiving meal. Charlotte laboured in her miniture apartment to prepare a Thanksgiving meal for Francois and I. The meal consisted of a generous portion of baked chicken, along with an assortment of fixings – cranberry juice, sauce, potatoes including sweet potato.

Finally, near day's end, a couple of persons tried to mar our banner. First a young woman, brandishing a magic marker took sights on the banner in a menacingly manner; fortunately I was able to dissuade her from doing any damage.

The fate of the banner in the second attempt was not as trivial. A half hour after the first incident, a young man on a bike appeared and managed to sweep the banner twice with black streaks before I intervened. 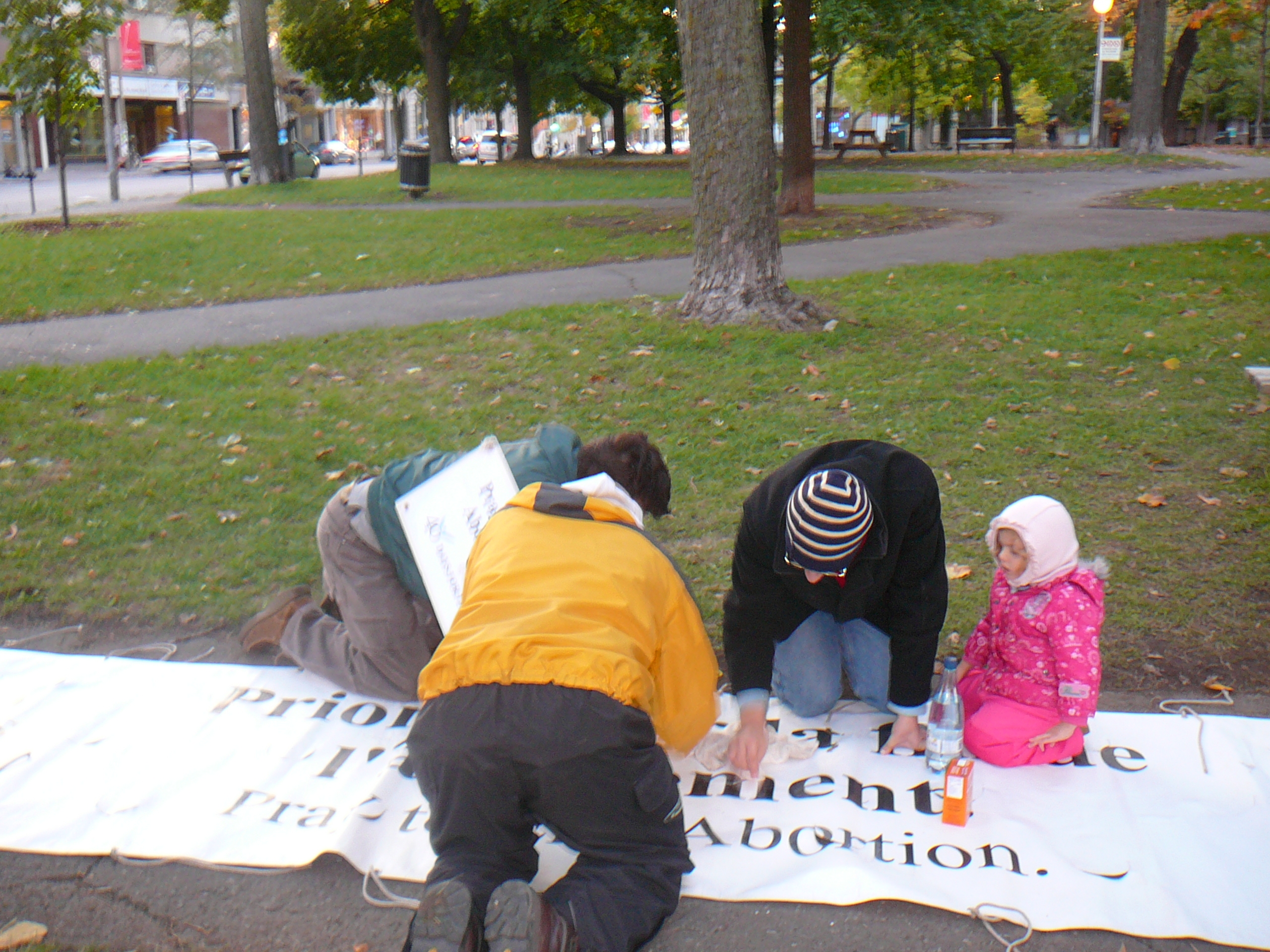 Fortunatley, our clean up crew, led by Pierre and including little Camille, were able to remove the better part of the stains. On learning of the incident the next day, Francois perused the banner, saying afterwards that he was not able to see any traces. Thanks Pierre.

The vigil runs through Sunday, November 4th, and prayers may be found on site daily from 7 a.m. until 7 p.m.

So far, during the current vigil, over 130 children have been spared death due to abortion. Keep your prayers coming.