An Eerie Silence. Good and evil are realities we are all well familiar with, realities that battle one another and no better place to see such a battle is outside an abortion mill. I was reminded of this in light of an incident from a week ago Saturday.

The afternoon began peacefully enough - with a community picnic. Michel and his wife Lise had brought lunch for those of us at the vigil site; a welcomed soup. During the meal, as I was standing next to our banner, an eerie silence caught my attention. For those of you unfamiliar with the intersection of Saint Joseph and Saint Laurent boulevards, where the vigil is taking place, silence is not a word that readily comes to mind. Rather, cacophony is more apt as there is a steady stream of cars and trucks and buses, screaming sirens from the emergency vehicles, and the blowing wind through the plentiful trees. Not silence. Yet, for a brief moment, all was quiet. Eerie, I thought. An omen, perhaps?

The afternoon passed. Michel, Lise and others left. We were no more than seven or eight when three youth, in their early 20s, one guy and two girls, showed up and for sixty minutes performed a horrific skit. The lad with several props - a doll, a rosary, and a statue of Jesus, began to twist the doll’s head round and round while screaming, with his peers playing their parts - cawing madly like crows.

The skit was macabre. A three year-old in our group as well as her mother cringed at the performance and not before long father led them away. Another two in our party withdrew to a nearly coffee shop. I remained, alone, praying!

Prayers Answered. Along comes one of our more colorful prayer warriors. Not unfamiliar with street theater himself, with his ghetto blaster and electric guitar, André charges up to the three youth and begins his religious rhapsodies. A theatrical battle ensues. Who won? In time both camps tone down their acts and conversation begins between them.

Finally other angels arrived. Miguel and his family have a knack for showing up when there is some kind of spiritual battle going on. During the fall 2012 vigil, his wife Monica appeared out of nowhere to confront a youth who had been confronting me. On this day, she dawns a pro-life sign and unabashedly strolls with her youngest around the site. As for Miguel, he joins me in prayer. In time the youth leave.

Here are my heroes: 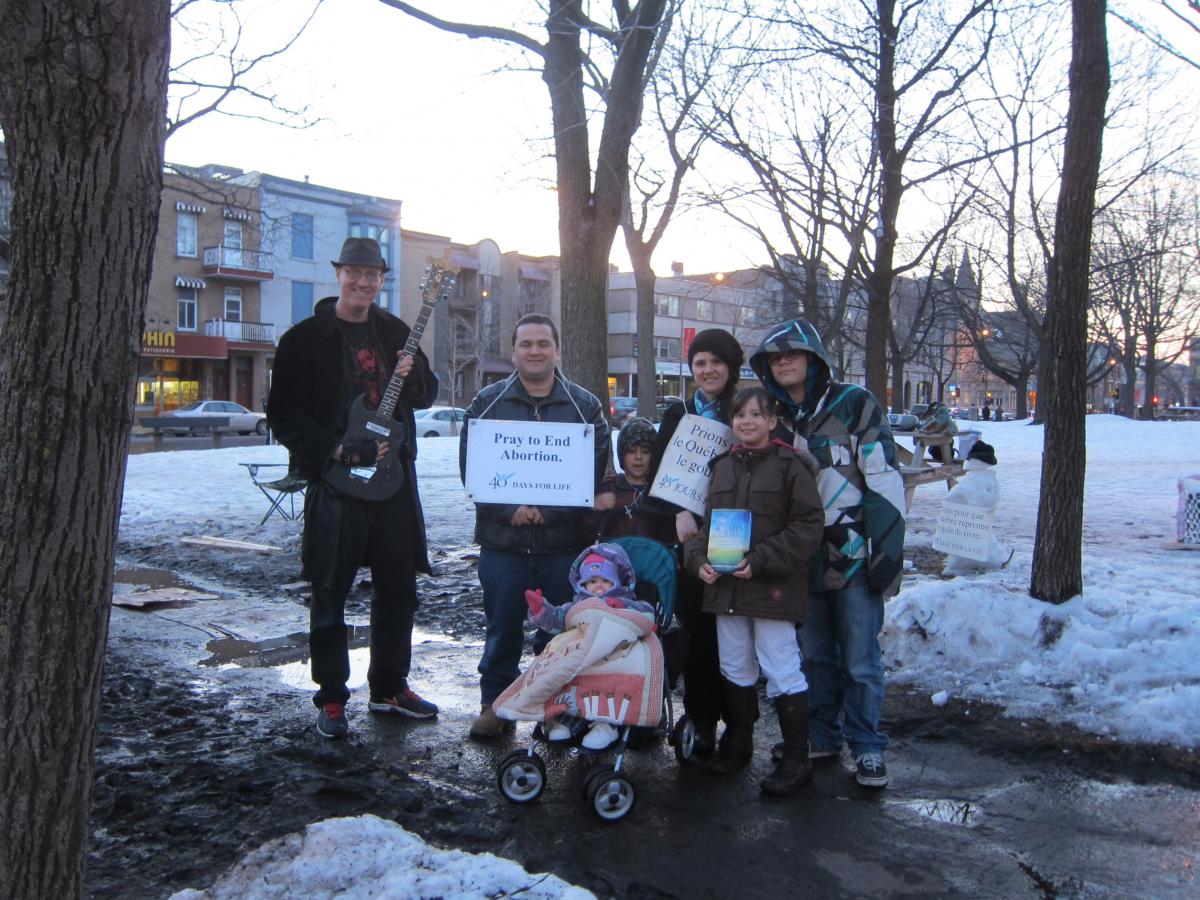 Vigil Schedule – The vigil is blessed to have a wonderful crew closing the site each night. Thanks go out to Philip, Andrew, and Pierre. As for the middle hours needing coverage this coming week, here are the intevals where your assistance is needed: Tuesday (1-4 p.m.), Wednesday (10 a.m. – 2 p.m.), and Thursday & Friday (10 a.m. – 4 p.m.).

Number of Saved babies? As of Day 33 of the vigil (March 17), there have been 417 babies saved from abortion.

The young lass who came to visit us last fall after leaving the abortion gave birth this past Friday (March 15) to a 2.9 kg boy. Both are doing fine.

R.I.P. – Mr. Jean-Marie Courbon. Mr. Courbon was a resident at Résidence Saint-Dominique, the senior residence bordering the park in which the vigil is being held. He would occasionally come by and chant the Angelus and sing the Salve Regina.