This maxim, comforting to those who practice twelve-step spirituality, came to mind after I received a most unusual invitation. Let me explain.

Last week, I got a call from Betty, a new acquaintance and supporter of our work. She was telephoning to ask me whether I was interested in presenting the work I do and the academic path I had taken to a group of high school students as part of their vocational discernment studies. Needless to say my answer was “Yes.”

As you no doubt know, promoting the pro-life message in our society is a hard sell. We are met either with indifference or with derision rather than support seven times out of ten.

Rather it is the opposite ideology that is readily seen and heard. The promotion of promiscuity is favoured by the media, both print and television. Our politicians at both the federal and provincial levels advocate a similar pro-choice ideology; Justin Trudeau is not untypical of our leaders.

So, the opportunity to express our view, particularly to a youthful audience, is a rare godsend.

I approached the exercise in fear and trembling for two reasons. First, I am not a public speaker. I prefer one-to-one encounters. Addressing larger groups frequently flusters me, leaving me out of breath and tongue tied.

Second, I was not quite sure of my audience. The topics of abortion and euthanasia can evoke strong emotions – the first, irrational anger and the second, confusion. Yet, in my years, I have been encouraged of the openness of our youth to discuss the first of these.

On the appointed day, I joined Betty and six other community members in an empty room, seated about a large oblong table. My peers included two nurses, a school teacher, a seamstress, a priest, and a clerk. Several among us were mothers or fathers, and readily shared their experiences of juggling priorities as hard-working parents.

In no time, the room was filled with 25 fourteen and fifteen year-olds, boys and girls, accompanied by their teacher. They listened respectfully for fifty minutes.

My seven-minute spiel went well. Yes, I was nervous, yet remained undaunted, describing my work here at the Quebec Life Coalition and my path from early days in Montreal.

I mentioned that I was born in a hospital not far from their school. Studied in schools many of which they were not unfamiliar with, excelled in math and physics and eventually graduated with an engineering degree. A pivotal moment in my life was accepting an invitation by my parish vicar to participate in a children’s liturgy program. This altered the course of my career – spurring on my interest in my Faith, both academically and inpractice. In time, this journey impacted me professionally.

In the end the students left, I believe, with a greater sense of differing careers, thereby helping them to discern where God may be calling them to earn a living.

We seven are invited back at week’s end for a Q & A with the students, who have been assigned each to formulate a question.

With at least 30,000 abortions per year in Quebec, God alone can change this state of affairs. And He is, through gestures like that of Betty’s. 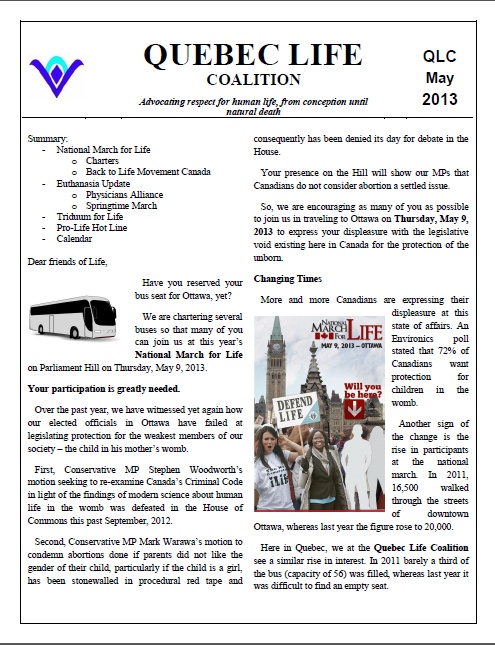