Walk Alongside With Jesus : 2nd Edition

This past Saturday, June 2, under cloudy skies, I was one among ten Montrealers who travelled to Quebec City in order to participate in the second annual Marche Chrétienne - Walk Alongside with Jesus.

We met at Mary Queen of the World Cathedral in downtown Montreal, and after the 7:30 a.m. mass, filled two cars and drove three hours to the provincial capital.

The rendez-vous location in Quebec City was appropriately The Plains of Abraham.  It was here back on September 13, 1759, that the Battle of Quebec took place, pitting French forces against the English.

On this Saturday, three centuries later, a different battle was being fought. We came to defend the Christian roots of our society from the forces of laicisation.

On so we gather with the Cross as our standard. 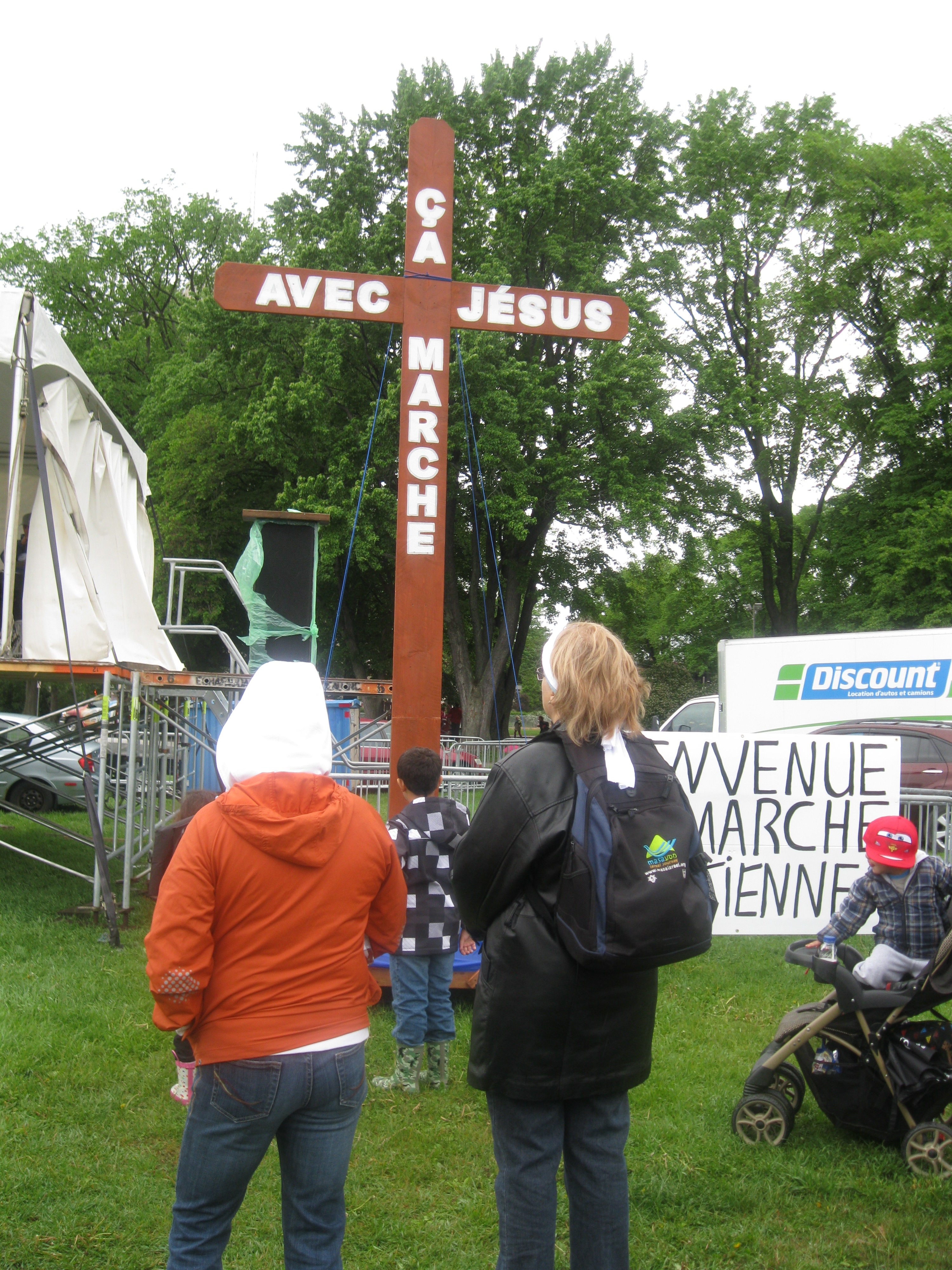 The difference with ages ago is that music and speeches replaced the retorts of canons and muskets. 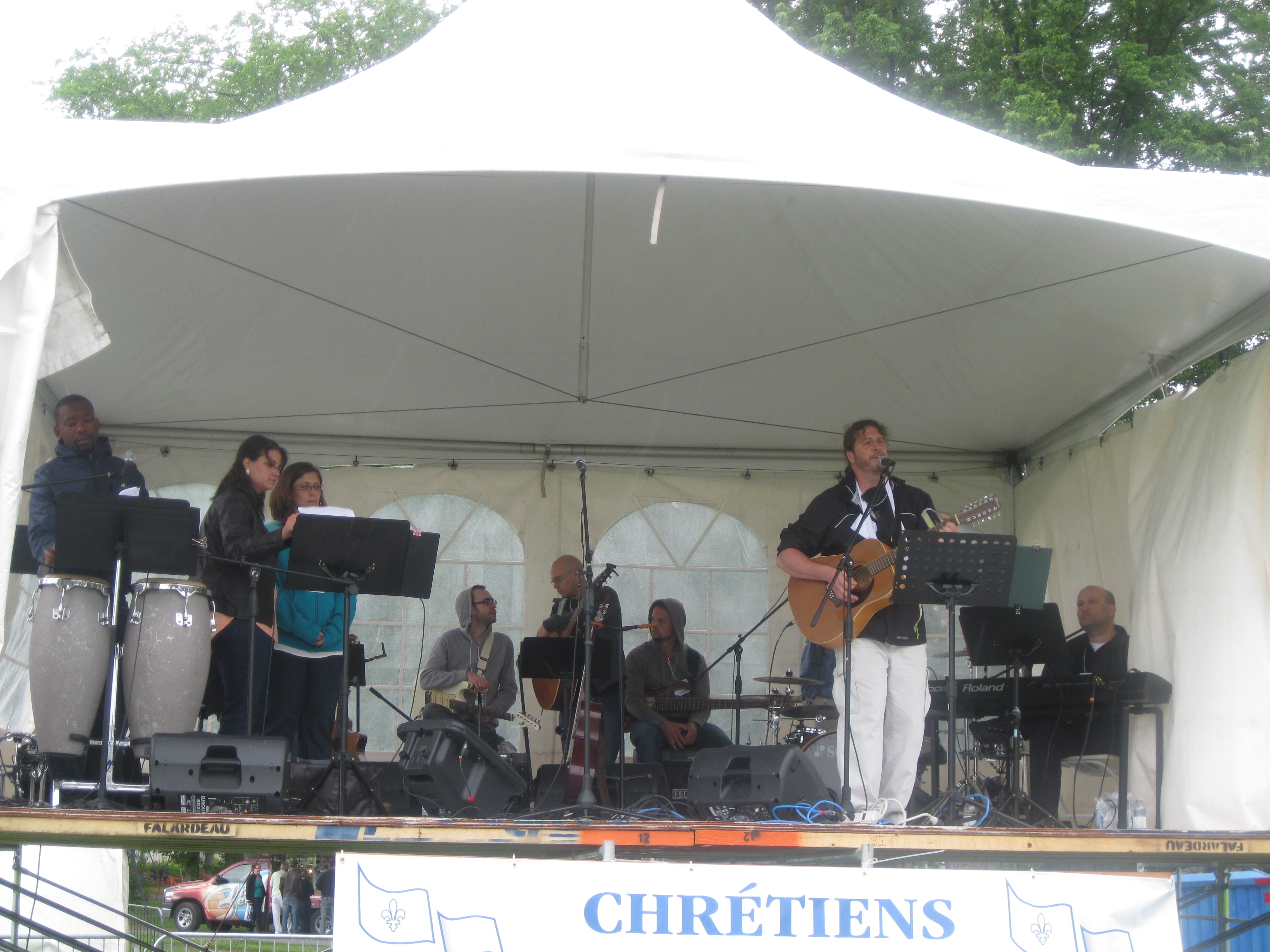 At about 2:15 p.m. the crowd assembled behind the twelve-foot high cross that would lead our way out onto Grande Allée avenue, towards the provincial legislative building. 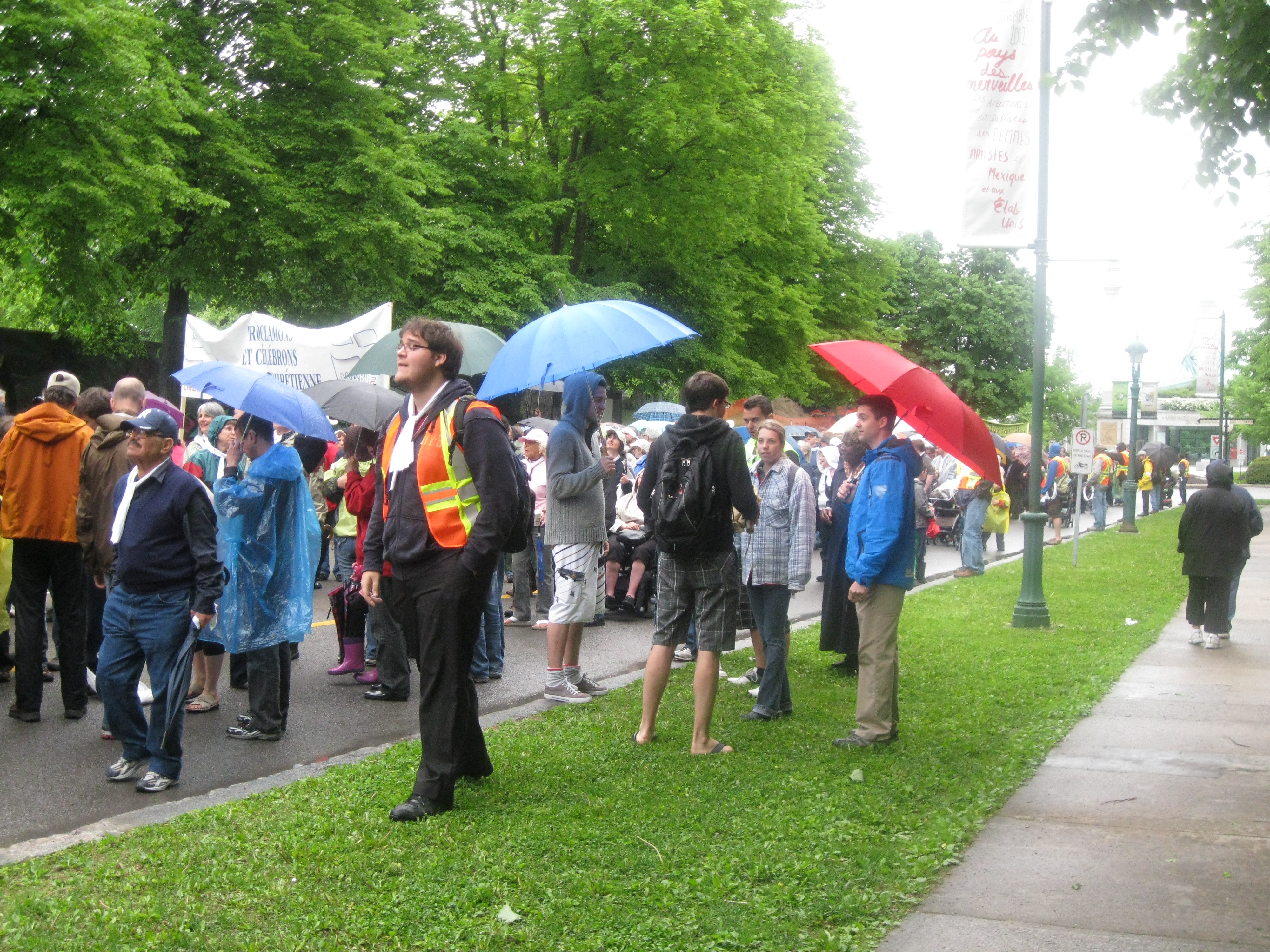 At about 2:30 p.m., the 650 or so people who had braved this day began the walk. Along the way, I spoke with peoples from different parts of the province - Gatineau, Victoriaville, Laval, Trois-Rivières, la Beauce, ... 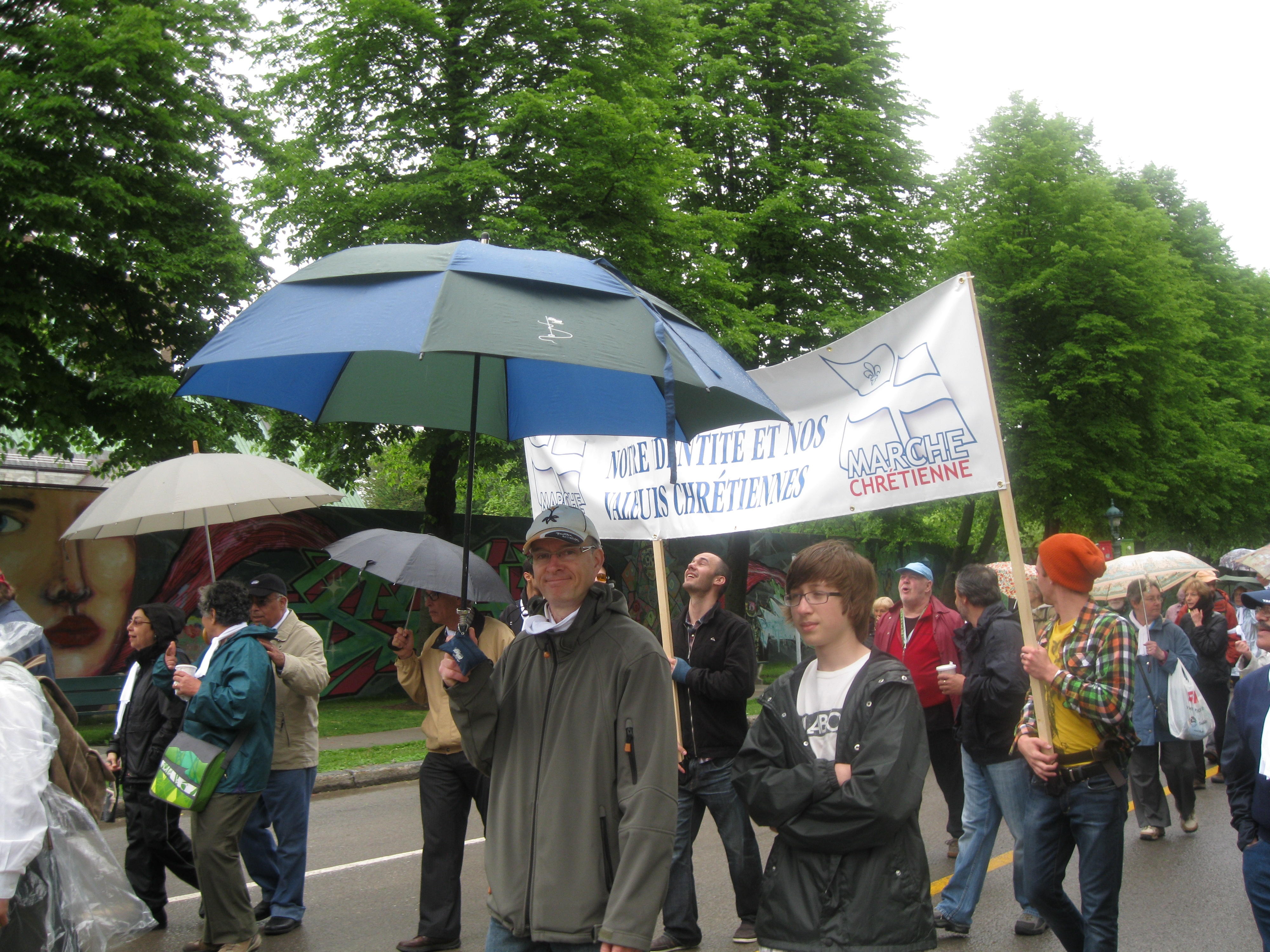 Throughout the walk the skies remained overcast, yet no rain fell. Below, we are on Grande Allée avenue, looking towards the Plains of Abraham, about mid-way along the 1.6 km trek. 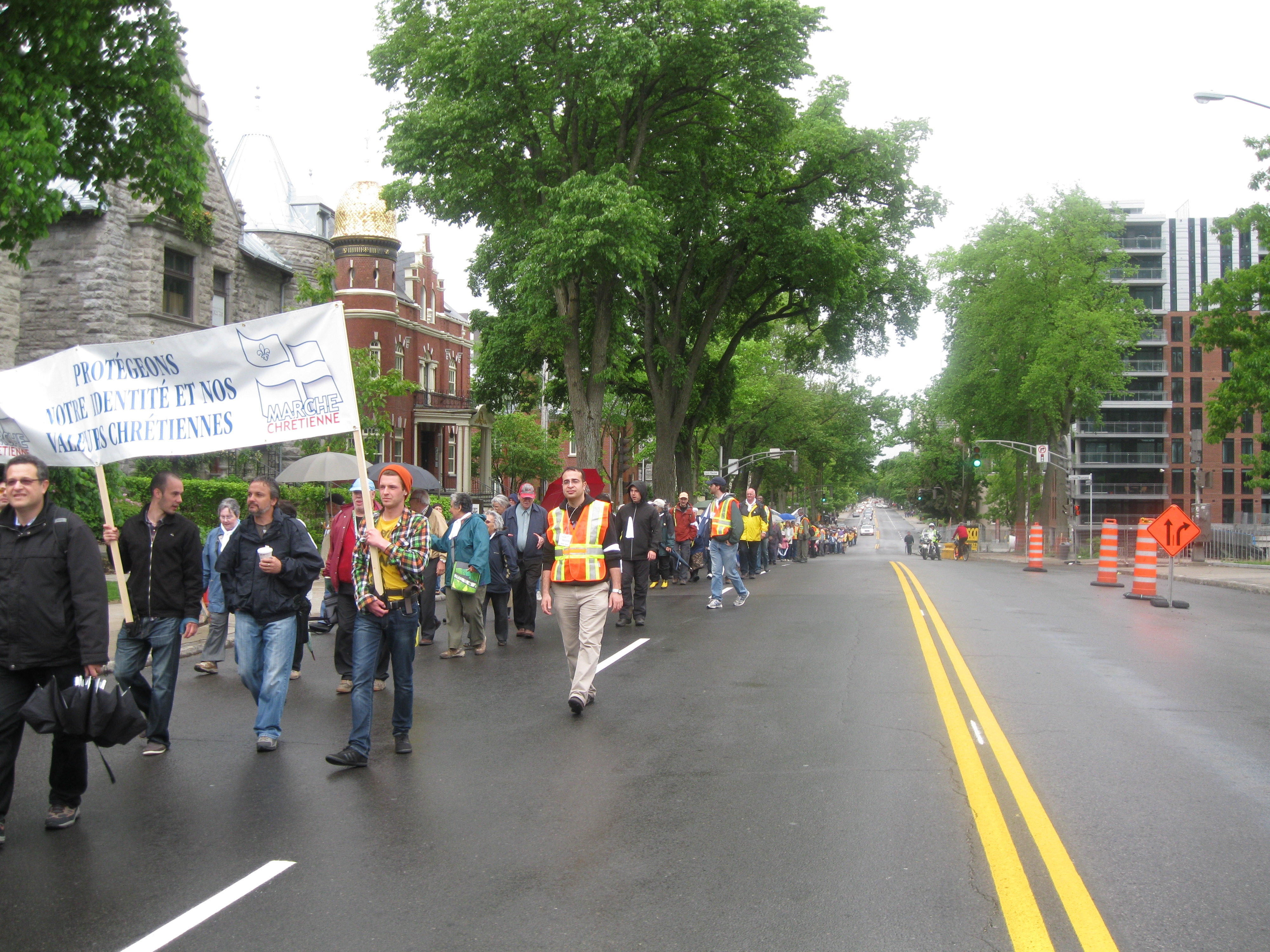 We walked five to six abreast, speaking among ourselves or greeting on-lookers.

Arriving at the provincial legislative building, the skies finally opened. Despite this, music was played and speeches given. Finally, the proceedings ended at around 4:30 p.m., when our group retired to a comfortable restaurant before returning to Montreal. 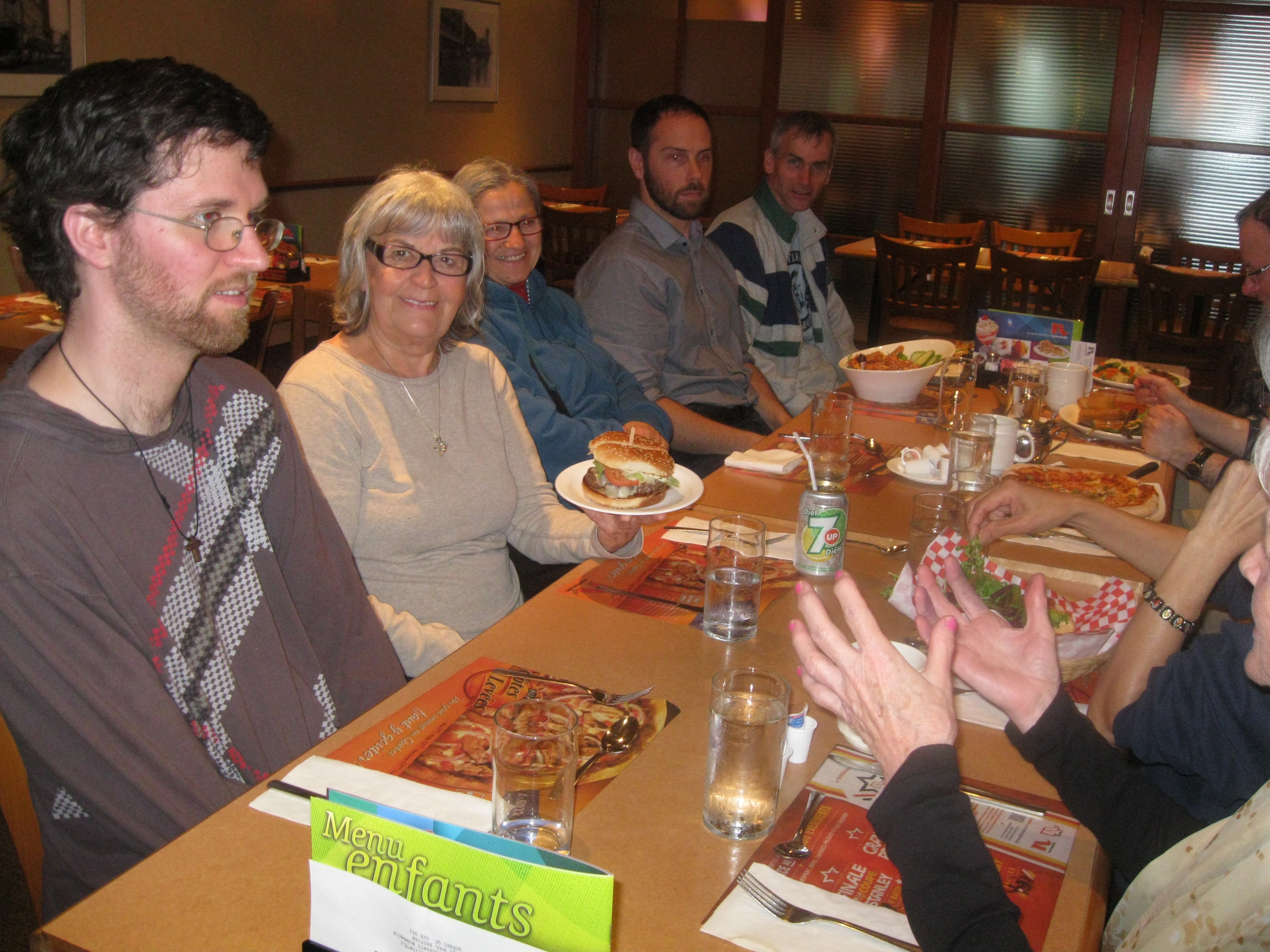 due to low numbers

there will not be any charter bus

We regret any inconvenience this may cause to you plans.

Last year over 1000 people walked along the Grande Allée from the Plains of Abraham Battlefields Parks to the provincial legislature in order to affirm that our Christian heritage has a place in the governance of our modern society.

We encourage everybody to be in Quebec City on June 2 to show your pride in this heritage, a heritage whose values not only founded but also has sustained Quebec society ever since.

Yet these values are being threatened. The Quebec society is purging its institutions of religious symbols - i.e., laicization.

It is incumbant to every Christian to affirm his faith, to express our pride as members of the body of Christ.

So, on June 2, walk with Christ, supporting His petition to bring the Good News to all corners of our society, one which is in much need of His transforing love.

Or go to our Facebook page to follow along as we prepare for this second annual walk of the Christian walk.

Your questions may be directed to :

We will meet and gather on the Plains of Abraham (The Battlefields Park - 835 ave Wilfrid Laurier), across the street from the Musée du Québec

14h15 Preparations & Guidelines for the Walk

14h30 Start of the Walk - 1.4 km silent procession (banners and signs are not permitted, except for those indicating your town or region)

See you in Quebec City next June 2 !