Talk on Palliative Care and Euthanasia in Montreal

Dr. Manuel Borod is vehementlt opposed to Bill 52, the bill which has passed earlier this year and proposes to legalize euthanasia in Quebec.

Dr. Manuel Borod practiced family medicine for 20 years prior to embarking on a career in palliative medicine.

He developed the home care program at Mount Sinai Hospital prior to coming to the MUHC on a full-time basis. He served as Clinical Director of Palliative Care there from 2003-2009 and since then has been the Division Director.

He has been very active in improving and developing different programs such as out-patient services which include a palliative care day hospital, cancer rehabilitation and a multidisciplinary program on cancer pain. He has long been a dedicated teacher and mentor to medical students, residents, and colleagues.

Dr. Borod has given many presentations at local, national and international conferences on a number of subjects including cancer pain, ethics, palliative sedation and euthanasia as well as the role of humour in palliative care.

Archbishop Calls for a Day of Prayer 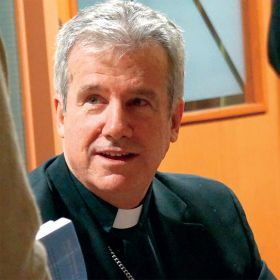 Montreal Archbishop Christian Lepine is calling all faithful to a day of prayer and fasting to commemorate the World Day for the Sick.

The day also holds special significance, said the archbishop in an open letter, as the Quebec legislature reconvenes tomorrow and will be voting shortly on legislation which will permit physicians ot euthanize their patients.

The archbishop concluded his letter by inviting all persons to come to the Cathedral tomorrow evening for a Eucharistic celebration. The purpose of the celebration is to "celebrate in solidarity with those who are sick and suffering."

The following video is the archbishop's invitation to participate tomorrow:

Euthanasia: The Truth, The Facts, The Numbers

The following comes from the group Living with Dignity.

To claim the contrary is to deceive the public and our legislators.

Bill 52 is modelled closely on the Belgian euthanasia law.

60,80010 deaths. There would have been between 608 and 1,824 deaths caused by euthanasia depending on whether one uses the Belgian or Dutch percentages.

According to the World Health Organisation, palliative care intends neither to hasten nor postpone death .25

Ask your MNA to vote against Bill 52. Now. You can easily contribute to the prevention of this catastrophy: contact your MNA as soon as possible and inform them of these facts they probably don't know about. The final vote will take place in February 2014